Rev Christina Jayarathnam greeted us at the car park of Citiraya Centre. “The service starts at 9.30am not at 9.00. Shall we have coffee?”. Over teh o, Christina shared about her husband’s dream several years ago.  Rev Dr Amos Jayarathnam had dreamt of a tiger on a table which stared at him and said, “I am not going to harm you, why are you afraid of me?” The tiger then became a woman who led him to a bus and bid him to go with her. This dream actually prepared them to go help the tsunammi hit people of Vanni in Sri Lanka under the control of the Tamil Tigers. They later went and brought aid and relief to the people there through the church. Later on Rev Amos, would recognize the woman in the dream as the wife of the pastor they had partnered with in Vanni. Rev Amos, who is well accepted and regarded for his prophecies, later on, was a catalyst for prayer meetings in Colombo, the capital of Sri Lanka.  The meetings brought churches together to pray for peace in Sri Lanka. In one of the bigger meetings, Rev Amos prophesied, “There would be peace in Sri Lanka within two years!”  A newsman put this on the front page of his newspaper. The thought was ridiculed. God, however, watched over His word, and accomplished it. Today there is peace in Sri Lanka.

Rev Amos Jayarathnam and I went back a long time to the late 1970’s. We were members of World Revival Prayer Fellowship. He played the bongo in the church service and I was a hungry believer. It was revival time and the Holy Spirit was working powerfully in people’s lives. At least 15 whom I know have felt the call of the Lord during that time have gone on to be full time pastors and missionaries and ministers. Amos and myself are just two of these. 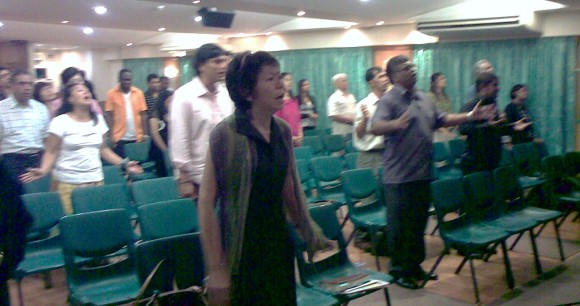 Worshiping and preaching at Tabernacle of Holiness

Rev Xavier Dawes, who succeeded Rev Amos as senior pastor of the Tabernacle, had graciously invited me to preach at his church. For many years I had been unwilling to preach in other churches due to commitments at home. Now a seasoned pastor, Rev Chua Seng Lee, has joined the church team, and this has opened the way for me to take more speaking engagements and serve the larger body of Christ. 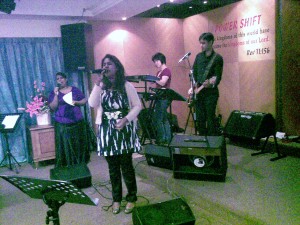 There were about 60 worshippers in the English service that Sunday. Most were Indians of different enthnic groups. There were Sindhis, Malayalees, Tamils and Gujeratis, Indonesians, Filippinos and some Chinese. Multi-ethnicity is one of the marks of the Spirit’s work  and it was a joy to see that racial divides have been torn down in Christ.

The music was vibrant and was led by Joanna Jayarathnam, who spent two years training in Hillsongs, with one year of Bible, and another in music and worship. The influence of Hillsongs was evident and it helped me to pray and be filled with the Spirit. The sermon w 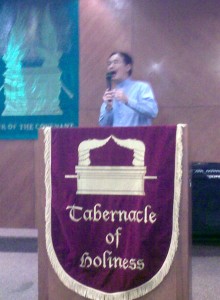 as based on Romans 1: 16, 17, about the revealed and received righteousness of God. The thoughts and words went forth with ease and I was pleased with the liberty and clarity. I pray they enjoyed the message and were blessed, as much as I was privileged in releasing it.

Punching above their weight

As I walked back to my church 10 minutes from TOH, I thought of Sri Lanka. I thought of TOH, a small church with a mega impact. People should stop looking down on small churches: many are punching above their weight. Its not a crime to be a small church; its a crime for a church to be small minded. Small churches deserve more respect and appreciation.

(Unable to post pics I took of the TOH pastors. The data was lost when I dropped my Nokia.)