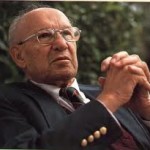 “‘Leadership personality,’ ‘leadership style’ and ‘leadership traits’ do not exist. Among the most effective leaders I have encountered and worked with in a half century, some locked themselves into their office and others were ultragregarious…..Some were quick and impulsive; others studied and studied again and took forever to come to a decision. Some were warm and instantly ‘simpatico’; others remained aloof even after years of working closely with others, not only with outsiders like me but with the people with their own organization….The one and only personality trait the effective ones I have encountered have in common was something they did not have: they had little or no ‘charisma’ and little use either for the term or what it signifies.” -PETER DRUCKER, IN THE FOREWORD TO THE LEADER OF THE FUTURE: NEW VISIONS, STRATEGIES AND PRACTICES FOR THE NEXT ERA.