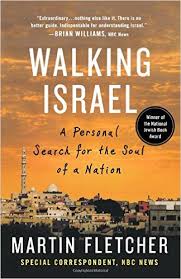 Walking Israel by Martin Fletcher is a good read for those who want to peer into the soul of modern Israel. There are those whose interest in Israel is only in its role as a time clock to the end-times. They are not interested in its people, their identity and their culture. This book can help fill that gap. I picked this book up in one of those 3 for $10 sales in the atrium of some shopping mall in October 2015 and am surprised that I actually finished it by 30th December. I enjoyed reading it. Martin Fletcher, a foreign correspondent for NBC news for 35 years worked in Israel for decades. Good storytelling, reporting and interviews peppers the book and opens up the soul of the ordinary Israeli to the reader. Sometimes the author discloses his charming self and we feel connected and sympathetic towards his viewpoints. I learned a lot reading the book, but here are seven interesting things: