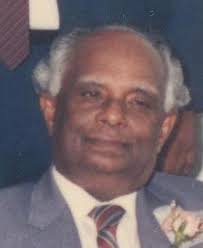 Pastor Johney went home to glory on the 9th of  Nov 2001 and I thought it is good, since it is 9th of November today, if I could share some of the things I learned from this simple man of God, as I was close to him and he was my mentor and a father figure to me.

Firstly, humility. He was an unassuming man who never took credit for all the good and the sacrifices he had made for the Lord he served and still serves. He knew his strengths and his weaknesses. He guided gifted young people around him, and gave space for them to discover, deploy and develop their gifts. They flourished and he affirmed them and gave glory to God. He never saw himself as better, higher or superior to others because of his title. He served among us and treated us as his equals. He never talked down to us. He listened to our opinions and he never felt offended if we forgot to consult him and differed with him on a decision. He never pulled rank, but sought to persuade patiently waiting on God to have His will done.

Secondly, holiness. He walked with God in the ancient and proven paths: he read and meditated on God’s Word; he prayed; he believed and obeyed the truth. He walked the talk. No complicated deeper life talk. A life of prayer, devotion and solid stewardship of God’s resources and gifts in his life. He set himself apart to God to serve the Lord, and the church God assigned him to.

Thirdly, enduring faith. He never lost faith when the chips were down. There was always hope; he was an anchor in the stormy seas of the difficult periods of our church’s history. When others would have given up, he patiently continued in a steady faith and hope-filled outlook. The church was small and had to support so many full-time workers. It was tough to juggle and sometimes it looked discouraging, but he never despaired, and continued in prayer, and God indeed always proved Himself faithful in providing us with more than sufficient to meet our needs. When the church went through the wandering years of moving from one public rented space to another, losing members in every move and unable to muscle into the HDB church sites because of insufficient funds, he never gave up hope but kept his eyes fixed on God and the strength to endure and persevered in the toughest moments of trials, crisis, discouragement, disunity, and declining membership.

Fourthly, prayer. He prayed consistently with his wife, Sister Johney for all the members and concerns of the church, his family and Malayalee community. His faith in the efficacy of prayer is unshakeable. They would pray together in the morning and at night. They would have the staff over for intercession, sharing and lunch or tea. They will always be present for prayer meetings. I unburdened myself to them about a hopeless or intractable situation they would encourage me with a simple message, “Pray, brother, pray. Prayer changes things”, which I already know of course, but coming from such unshakeable faith, it was like a fresh word that strengthens my soul and gave me hope.

Fifthly, self-control. Temperance, moderation and the grace to keep in check the desires of the flesh and the natural tendencies. Few will believe if I say that before he encountered the Holy Spirit, he was an outspoken person with strong opinions. He has such a gentle disposition, one where all that force of personality and strength of position in the church as senior pastor was held back in check by spiritual brakes. He does not order; he suggests. He does not insist; but would persuade.

Sixth, he managed his family well, training them when young and relying more on prayer and persuasion as they grew older. He was prudent with his finances and trusted God for provision and was able to help others financially too. More than once he blessed me financially and I have known him to give to church members who were in need even though he himself received from the church, by his own self-imposition, a small stipend.

Seventh, he had a lot of short stories and witty sayings. He was like a walking Daily Bread devotional. I used quite a lot of his stuff for personal feeding and my sermon illustrations. Often he would answer my questions with a story. Other times, while I was driving, he would drop a story or two about some truths he read recently. Sometimes these timeless truths were so timely for my needs and I was blessed by the uncanny timing of his quips and stories. He loved reading devotional books. He said at his age he could not read through a whole book but preferred reading concise, distilled devotional stuff. Despite this personal preference in reading, he thoroughly believed in Bible school/ theological training. I remember his quip, “Be fully baked, not half-baked.” …a reference to long-term versus short-term training. He encouraged all the pastors to get their theological training, whether local or overseas. Our pastors and missionaries trained in Trinity Theological College, Singapore Bible College, New Zealand Bible College, WEC Missionary Training College in Tasmainia, Bethany Bible College, and Fuller Theological Seminary in USA.

Ninth, I shall go no further even though I could. But I would rather as a ninth point ask myself, “Have I been a good student?” I hope I have at least a B on my report card.

May his tribe increase!