This village was farther away.  We took a cab there. The moment we arrived and got out, we were surrounded by four colourfully dressed tribal ladies who wanted to sell their wares. Earlier in the car, in the hope we would be left alone, I told everyone to avoid eye contact and to not entertain them. But this was not to be. Truth be told, they did not badger us but quietly accompanied us down the concrete path, try to make conversation by asking questions, “Where you from?”, “Want to buy?”, “Handmade”. But somehow it mildly frustrated us as we could not carry out our conversations and take the photos we wanted.

Curiosity got the better of my wife and she started conversing with one of the young women of about 22 years of age. She spoke English. She has three children and in the early morning her husband and herself would work on their rice field. In the afternoon, the husband would look after the children while she went out to try to sell handmade craft. “Where did you learn your English?” “At the Hmong tourism training center”. This was one of the good things the 75,000 Vietnamese dong fee (SGD$4.50) to get into the village goes to. And by going out to speak to English-speaking tourists, her conversational English must have improved more quickly than those who learned it in the classroom only. 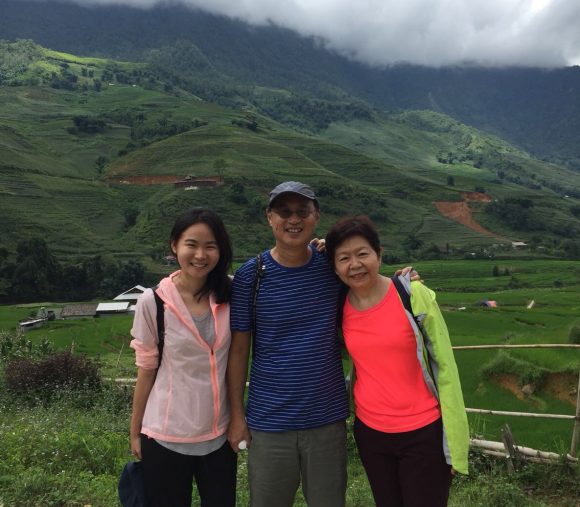 The four ladies followed us all the way into the Lao Chai village. We had stopped there after about forty minutes of walking, having relished the scenic green rice fields against the background of mist-shrouded mountains. In the restaurant, we ordered drinks, with the rice fields a metre away from where we sat. My wife bargained and bought their handmade stuff, She bought a few things she would never really use except possibly the pouch the size of a mobile phone. From then on, the ladies left us to look for new customers.

The grocery shop owner next door said it was about 2 km to the next village where we could get a cab, and if there was none, to get a bus. So we walked on as we thought it would be good exercise. However after about 40 minutes of leisurely walking we found ourselves in front of a family home at the end of a path. Lost. We got some advice and headed back and by the grace of God found a taxi that had just sent a customer to a homestay place we passed. He got us back to Sapa town for about the same amount as a Grab cab would charge, a mere 20,000 VND (SGD$1.20) more than Grab. I was praising God because my absence from the regular hiking group, has made my hiking fitness suspect. The only way back to Sapa town was uphill and we passed many hikers. My estimate is that it would have taken us a good three hours to do that climb back to Sapa.

Sapa by night: the town square

We went out from the hotel at 8pm. We wanted to see what Sapa felt like at night. This was our first evening out. Like all the other nights, it drizzled.  At the town square we saw young people playing  chapteh, where instead of kicking a ball, a group in a circle would kick an object made of feather tied to a base of rubber discs. The idea is to keep the chapteh in the air.

Dancing in the dark

While the youths were chatting and playing chapteh, we spotted a group of middle aged people dancing. We were captivated and saw these people dance about three different kinds of dances. Some of them were good, some looked like they were still learning. It was fun watching but when the drizzle got bad, we headed for a nearby restaurant for our dinner. It was easy to look for dining places that are recommended when you have online access to TripAdvisor. We found one a stone’s throw away from where we were. After dinner, even though we had to walk back in the drizzle, we enjoyed the night. Thank you Jesus!