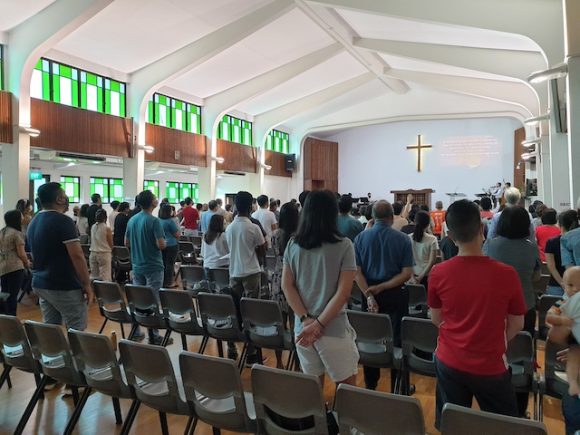 It was early Sunday morning at St John’s Chapel, and I was warmly welcomed by Revd Tang Wai Lung, the experienced priest who was newly appointed to lead the English congregation. He showed me around the lovely church sanctuary with parquet flooring and three-pointed arches that led your gaze upward to God. He showed me a set of four plaques that was preserved from their old church building in Jurong. He informed me that St John’s Chapel was originally a church plant initiated by Revd William Gomes and Mr Cheok Loi Fatt to reach out to farmers and villagers in Jurong in 1872.  By 1884, a church building was erected and a congregation established. The church was missional right from its birth. Thankfully, true to its DNA, St John’s Chapel has remained a strongly missional church that encourages all members young and old to sign up and embark on mission trips every other year. When the government took over the Jurong building for redevelopment, St John’s Chapel moved to St Margaret’s Secondary School, and has been there since.

I had two pleasant surprises before the service began. I met an old friend, Boon Sing, whom I knew from the Christian fellowship in Mindef, while doing my National Service. I recalled how we memorized verses and prayed together. The second surprise was that he was in the traditional choir of the church and they sang a lovely “Turn Your Eyes Upon Jesus”. Why did the song at the prelude and this song moved me? The Lord was reminding me of his presence in the meeting.

I was asked to preach a gospel message and I had only one thus far and I have preached this five times before. I still had to sit before the Lord in prayer, hovering over the script, and making minor modifications and improvements. It took time for me to warm up to the new faces in front of me, but as I proceeded, the delivery of the message got better and better. I was glad that people responded to the invitation to pray in the front, for all the kneelers in front of the stage were occupied. A period of prayer ensued and I prayed that these precious seekers of God would be rewarded with real answers to their prayers. While I have been praying for souls to be saved through my preaching, there was no response to my invitation to non-Christians present to follow Jesus. Strangely, I was not discouraged about this. I trust God to anoint his word and let it germinate in its time.

A missional and family church

After the service, I had refreshments at the school canteen with the priest Revd Wai Lung, and Canon Barry Leong, the acting vicar, and my old friend Boon Sing. I found it amazing that Barry had to oversee three churches in the past, and is currently overseeing two churches for the time being. He said the secret to doing this is to have the right people in place and to trust them. After he left to go to attend the service of the other church he was overseeing, I continued to chat with Wai Lung and we talked about the Revival of 1972, different church polities, the culture of St John’s Chapel and other Anglican churches. He told me besides its missions emphasis, St John’s was a family church, a close knit caring community, which gives deliberate intention to include all generations into its activities, whether it be games, church retreats, or ministry. I thought these qualities are wonderful strengths for smaller churches to have. My observation is that the quality of community closeness fades as the congregational size enlarges. So this is the strength that small churches can cultivate and leverage, and be different from big churches.

Well, this was a visit and ministry I enjoyed. Taking on speaking engagements while you are still pastoring, is different from doing them after you have retired. With retirement, you are well rested, you have more time and space for God to move your heart and prepare yourself, and you are able to preach with more energy, restfulness and grace.

If you are interested to know more about this church and its services, you may visit their website HERE. Other churches where I have guest preached in or visited can be read about HERE.