Three weddings and a funeral

It began with my son listening to his Japanese love albums. Overhearing, I found them catchy despite not understanding the lyrics. It sort of grows on you. I have watched many episodes of Japan hour and even caught some J movies and serials. Lately, I have used Japanese tracks for some of my slides in YouTube and videos. And I have been hearing them on and off. Subconcious decisions. Even now, with the cool of afternoon drizzle outside my window, Japanese songs are blaring in my bedroom and I am happily writing my blogposts for the week. Maybe its the J pop that stoked my creativity and lightness of being as reflected in my blogpost today.

I have conducted three weddings and a funeral in recent months. Interesting and very different ones. 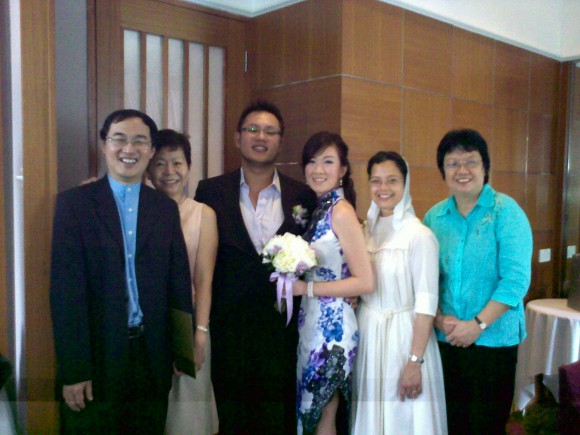 The first was at an award-winning restaurant along Clarke Quay just before the lunch crowd. It was a small intimate family affair. A ceremony for registration of the marriage of Nat and Janice. The HDB required proof of marriage but wedding plans was later. It reminded me of my own situation in 1980. I did the registration of my marriage to satisfy HDB requirements, and later did the church marriage solemnization. It was not uncommon in my days and quite a number of couples landed in the same quandary. So I conducted the marriage registration as deputy registrar of marriage for Nat and Janice, and after that they continue to live separately until their actual church marriage ceremony. Umm…..never mind if you don’t understand. Anyway I enjoyed the ambience, and the sumptuous leisurely lunch in a restaurant that overlooked the Singapore river. The second wedding was the marriage of my god-daughter Eunice and Colin. I was of course happy to see their relationship blossom into a covenant before God and man. An answered prayer for me. The wedding was elegance in full bloom. Well dressed good-looking young men and women of the entourage, as well as family, guests and well wishers. The location was unique and understatedly grand: the Asian Civilization Museum, with its old Brit colonial swagger. The ceremony went smoothly, everyone was relaxed despite the formality of dress, and the hall and reception area was tastefully decorated with elegant design touches that drew out the oohs and aahhs and phone cameras from aesthetes. Later they had a tea ceremony in the hall itself.  Eunice has uploaded early pics on her blog, Memoire of Eunice. The next evening was a dinner at the Tanglin Club with close family members and friends. It was like being in a movie as couples took to the dance floor and danced to live music….including novices like me and my wife, a first for us. 🙂 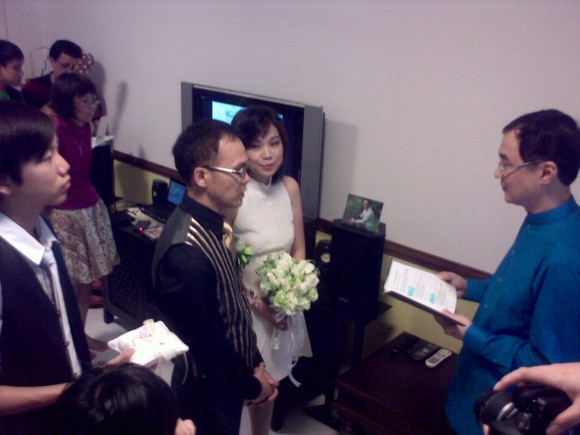 On New Year’s day, which was yesterday,  I did another kind of wedding. This one was done at home in a five room HDB flat. Stephen Koh and Lily Lim. It was surprisingly refreshing, free from the burden of dress and formality of the usual weddings. We were all dressed smart casual, and I could see the power of community of the small church, as the friends from the cell group went all out to help make the wedding special. From photo taking, to decor, to whatever else was needed that kept them at work until 4 am on the wedding day itself. The groom was so touched he choked while saying a heartfelt thanks to the cell group and helpers. I did the solemnization next to the LCD TV and the signing in the balcony, and we had excellent food from Four Seasons outside the larger than normal lift landing. The couple hosted their reception with two groups: one over lunch and one over dinner.

All three were so special. I like weddings. More Lord, more.

Now that I have written about three weddings, I have no heart to write about a special funeral I witnessed and participated in. The mood is just not right. Perhaps another time. But I will not change the catchy title for obvious reasons. 🙂