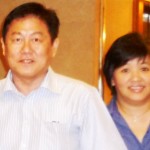 When I asked Alan Hiu from Kuching, Sarawak,  about his unusual surname, he explained that different dialect groups would pronounce it differently. “What about my surname?”, and I wrote the Chinese strokes for Chee in the air. He gave me a lesson on it: the Hockchiew (my father’s dialect) would call it “Hee”; the Cantonese would call it “Hui”; and the Hokkien would call it “Kho”. So how did I end up with Chee. My surname is Chee because it was transliterated according to sound by civil servant, and Hee became Chee. If they had gone by my mother tongue, my name would have been Kenny Kho or Koh.