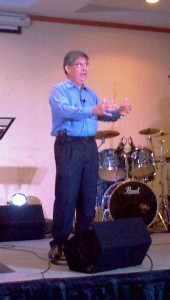 We entered an empty spacious basement car park of the Crown Towers, an office building. SIB Grace leased the 9th Floor auditorium and halls. There was space for 500 but a third of it was used as a fellowship area, while the rest were filled with seats. The attendance ranged from 150 to 200 every Sunday. The newly started early morning Mandarin service, and the Sunday school each has 50 in attendance. The English service started at 11.30am. After the singing and communion, Elder Thomas, taught the Word verse by verse. The topic was the stewardship of the Master’s goods and the believers’ progress. The offering was taken, notices given and a closing song wrapped up the service. There was a sense of restfulness about the service, with no one straining to pump up adrenalin, or make things happen, or worry about “Were the people touched by God during the service?”.

The lunch area overlooked a lovely view of the Sarawak river. Over snacks we met Bartholomew, a male nurse who worked in the city’s hospital. He could not attend services as regularly as he would want to because of his shift duties. However, he prayed for patients in the hospital, and had seen a few answers to prayers for healing. Improvements in leg movements and the pain of patients as a result of 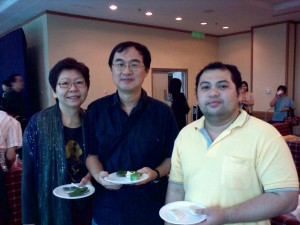 prayer. Other times, he prayed audaciously for patients who died to rise, but they never did……until recently. He shared with me, “The doctor had declared a sick patient dead, and the distraught family had cried over him. I was sent to get him ready for the mortuary. I prayed a simple prayer for God to raise him. To my utter surprise he came back to consciousness. The doctor was called back and was shocked to see it. Later, a church elder visited the patient as he recovered in hospital.” This was a sign and wonder. This low-key but stunning miracle reminded me of another memorable story of a brain-dead member who came back to life in the deaf fellowship of World Revival Prayer Fellowship, where I pastor. 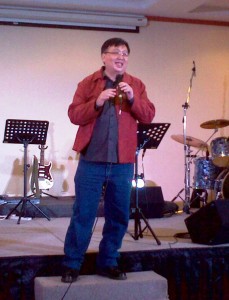 Looking for empty seats at the Kuching food festival was difficult. When we finally did, and others went to order different food, elder Alex, who does most of the preaching in church, shared with me about his journey. During the charismatic revival in Kuching in the 1980’s, St Faith Anglican church was the center of action among the Anglicans. There was so much intensity and activity during that revival. The next two decades saw many who suffered burn-out, including himself, a committed youth leader. On one of his trips to Singapore, his cousin brought him to his church, NCC. There God ministered to him through the message. When he returned to Kuching he wrote to the church and it sent him 22 cassette tapes. He studied all the messages. Alex had severe asthma so that even the air-conditioning of a car could result in an attack. After hearing the tapes, he was completely healed!

Church gripped by a message

Later, Alex met with Thomas and other acquaintances of the charismatic revival. They met above the Crossway Christian bookshop, and had energizing discussions about the books and tapes of Joseph Prince. From there the idea of starting an SIB preaching point began. That preaching point grew and after persevering through difficulties, became SIB Grace, a church that abounds with the grace of God.

(Footnote: The Borneo Evangelical Church or SIB (Malay:Sidang Injil Borneo) is one of the largest evangelical Protestant denominations in Malaysia with membership at about 500,000. SIB Grace is part of this denomination.)