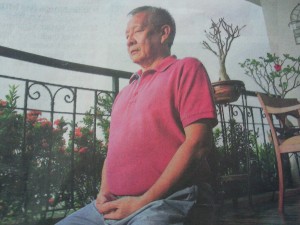 Interest in meditation increased with a New York Times interview with Lee Kuan Yew, where he opened a small window into his soul: he was an agnostic, but he had learned meditation from a Christian friend whom he admired. With eyes closed and body relaxed, he now repeated in his “innermost heart” a “mantra”. He used “ma-ra-na-tha”, an Aramaic word from the new testament, which in English meant, “Come Lord Jesus”. He did it to help him sleep when he felt helpless and pained with his wife’s discomfort in the room next door. His late wife, Mrs Lee (Mdm Kwa Geok Choo) had suffered several strokes and had been bedridden and speechless.

The NYT interview was followed up with an appropriate and illuminating interview with the Christian friend who has been meditating for 22 years and who taught Mr Lee how to meditate. His name is Mr Ng Kok Song, 62, and he spent 40 years investing Singapore’s reserves as group chief investment officer of Government of Singapore Investment Corporation (GIC).

He was interviewed by senior writer Lee Siew Hua, of the Straits Times, who also gave us the Glitz and the Gospel, a  weekend feature on the megachurch scene several weeks back. Drawing from excerpts from the chat with Mr Ng (ST, pg A 10, 22 Sep 2010), you could see what he thought of meditation and its benefits to all (headings in bold are mine).

“You can practise meditation with a secular mindset for relaxation and serenity. These are laudable objectives. But it could be a self-centred motivation. Or you can practise with a spiritual mindset. If you go deeper, and your are nourished by reading the scriptures or by your religion, this takes you into the dimension of relationship and prayer. Prayer is relationship with God. Christian meditation is a form of prayer. That opens you up to the dimension of transcendence. You move from self-centredness to other-centredness. In the Christian tradition, this is love.”

On the benefits of meditation, Mr Ng has much to say:

“I think it gives you greater clarity of mind, which helps in times of chaos and great stress, to see what’s the cause of things, what’s passing, what’s enduring and what’s really important.”

“It helps you not to be kan cheong(anxious, panicky). After doing your work to the best of your ability, you take a step back and go home, with some detachment from the results of your action.”

Mr Ng quoted scientific studies that indicate meditation benefits the right brain, which is linked to intuition and the big picture. Most executives are left brained which is linked mainly to logic and linear thought. “To be a whole person you need to tap into the untapped.”

Shapes the way you lead

“The will to lead cannot be an ego trip or domination. I would call it acceptance of responsibility. With meditation, your mind is remade. The way you see leadership becomes quite different. You see it as serving. You see it as the ability to admit that you don’t know everything and can make mistakes. Otherwise, you can lead your folks into disaster. In the silence of your meditation, in a very mysterious way, you come to understand yourself better. You come to a state where you see your limitations and also your potential…..and gradually you learn to love yourself as you are.”

“”The problem in Singapore is the consumerist tendency to measure our well-being too much in terms of lifestyle and material possessions, so much so that you don’t have time for expansion of the spirit. But the human being is not created for the self, but for others too. The way to experience joy in everything is not to seek to possess. This is in contrast to our material life.”

Christian meditation, in particular, those ancient forms of prayer, mainly preserved and maintained by the Roman Catholic and Eastern Orthodox streams, have seen a revival among evangelicals for over two decades. Conservatives and fundamentalists have generally been wary and suspicious of these as they have thrown away all things Roman with the Reformation. However, with our foundation soundly established in who Christ is and what He has done, we should wisely embrace some of these practices into the mainstream of evangelical respectability.

Having been exposed to the writings of Eugene Peterson, Richard Foster and others has helped me personally. More importantly I had colleagues like Rev Simon and Rinda Tan, who were thrilled by the retreat ministry during their theological training in New Zealand Bible College. Open to these ancient forms of prayer our church staff became the guinea pigs of “experimental prayer”. We were privileged to enjoy the Spirit’s breeze through the open windows of our minds and hearts.

We tried many ancient practices of prayer and meditation like lectio divina, examen, centering prayer, meditation, silent retreats, having spiritual direction and journaling. Certain practices have stayed with me over the years.Practices like journaling, lectio divina, examen and what Mr Ng does. Meditation is a form of prayer all Christians should feel comfortable with. Sitting in outer and inner silence, relaxed and breathing slowly and deeply. Repeating silently some love or scripture word or phrase in the inmost heart is edifying. My favourite is “Papa” or  “speaking in tongues” in my inmost heart. Another practice I love to do is going on regular several day retreats with others or in solitude. If you are interested you may want to sign up for a retreat with Simon and Rinda Tan who are now full-time spiritual directors and lead the ministry called Listening Inn.