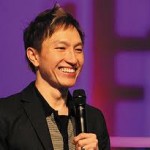 Being human I am not surprised at myself when a secret momentary delight surfaces when the mighty are cut down. We small church pastors have been made to look like inferior products compared with these mighty men and their churches, and whenever a merciless media cut them down to size, we somehow feel taller. However, it was not to be so when news broke about Kong Hee’s arrest together with 4 other leaders of City Harvest Church.

The morning after the Straits Times featured their stories, I awoke and imagined how painful it must have been for Kong Hee and Sun Ho. It ached. I flashed a prayer to the Lord for them. I am learning to weep with those who weep, to feel other people’s pain in my heart, and not to throw stones. Prayer has a way of aligning our heart attitudes to God’s.

I see the seriousness of the charges, but I do not condemn him. Not because we share a similar vocation, but simply because he is another frail human being. Only God is perfect, and all of us are flawed and imperfect. We are but common, easily broken, and earthen pots with hairline cracks; our only glory is in the content within: Christ himself. Even if he is guilty, which has not been proven yet, who am I, another frail human being, to throw stones?

Christians will be besieged by questions from friends and family members. With wisdom and graciousness we can let God’s grace shine even from what seems to be a dark moment for the church. For one thing, we must realize the church is not a target of the authorities. Let’s not demonize the intentions of the government. God knows the intention of every heart, so leave that to Him.

Neither should we demonize the accused, because they like everyone else are innocent until proven guilty. The wise will not speculate or prejudge before the conclusion of the case. Although we often assume that if the government agency spent two years investigating, it is likely there is substance to their case, let us not make that assumption that the parties are guilty of all they were charged of.

On the other extreme, we put the accused on the pedestal, perfect as a classic sculpture, without a single flaw. We deify him; he could do no wrong. This is to be expected of followers of men, but not followers of Christ. Michael Jackson was perfect. Whitney Houston was perfect. Don’t you dare insinuate otherwise. This is not good, not real. We should support and love unconditionally and that means we let the law run its course and acknowledge that they may have done something wrong, we have faith in a sovereign God, we pray for the accused through this difficult trying period, and even if proven guilty, they will not be abandoned and thrown aside like used tissue paper on a hawker centre floor.

I cannot allow for some of the comments I have seen in the last two blog posts. I have to do unto others as I would want others to do unto me, and I wouldn’t want my church’s name put down in digital infamy forever and ever amen. So I have privatised the last two posts – too many specific churches’ and pastor’s names have been mentioned negatively.  Some of you have fire in your bones and some have pain in their hearts, and I request that you go directly to the people concerned and express your feelings. Perhaps you have already done that and there has been no response or change as you would want. I urge you then to leave it to God since you have done all that you can to speak the truth in love.

The saga, if I may call it that, will not end any time soon. May the Lord bless all believers with a spirit of love and discernment for we need these two qualities the most in these last days.