Putting on the armour of God 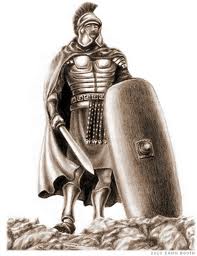 Putting on the armour of God the wrong way

What does it mean to put on the full armour of God? We can look at the different pieces of armour that protect different parts of the body in two basic ways. One is viewing it as something we need to do. The other is to view it as something Christ has already done. I used to hold to the former. This meant I had to put on each piece of armour by praying each piece on. If had not prayed to put it on daily, then I would be exposed to enemy attack. What anxiety I must have had. You see I learnt this from a sermon I heard in the 1980s. Obviously this daily prayer was not maintained for long.

Later this developed into another form of viewing the armour of God as something I needed to do. I needed to inculcate more truth, more righteousness in my life, share the gospel more, and cultivate hope and memorize more of the word of God to build my faith and to use against the enemy.  I soon realized there were big holes in my armour, for my faith often failed or faltered. My righteousness was always short of Jesus’ perfect righteousness. And I had not always been speaking or living out the truth consistently. All this meant my incomplete armour exposed me to the enemy! It was an insecure way to live the Christian life. There was anxiety and defeat instead of peace and victory.

Putting on the armour of God the right way

The other way to look at the armour of God is to see it as something God has already given us in Christ. I first saw this in a book titled “Into Battle” by Arthur Wallis. He saw all the pieces of armour as pointing to Christ and his finished work. The belt of truth was Jesus the way, the TRUTH and the life. The breastplate of righteousness was how God made Christ to be our righteousness. The shoes of the gospel of peace was how Jesus has become our peace by his death on the cross – making peace for us with God and with others. The helmet of salvation was Jesus our only hope of salvation for there was no other name under heaven whereby a man could be saved. The shield of faith was Jesus who protected us and shielded us from the evil one. Finally one of Jesus many titles is “the word of God” which happened to be the sword of the Spirit.

Thus Christ is the fulfilment of the full armour of God. When we have Christ and believe and stand on his finished work we have the whole armour of God on us. Like the switch is to the electric bulb, so is our faith in Christ’s finished work, the switch that puts on the armour. This attitude of faith in Christ brings rest, peace, victory and security.  I believe this interpretation of the armour of God is more in keeping with the overall tenet of Christian living and ministry – “by grace through faith”.

When the Christian stand in faith on the finished work of Christ and prays in the Spirit at all times with all kinds of prayer, he is God’s greatest offensive weapon in the spiritual battleground. More powerful yet, when such Christians come together to pray for God’s people and God’s servants they are like the Roman phalanx in attack mode.