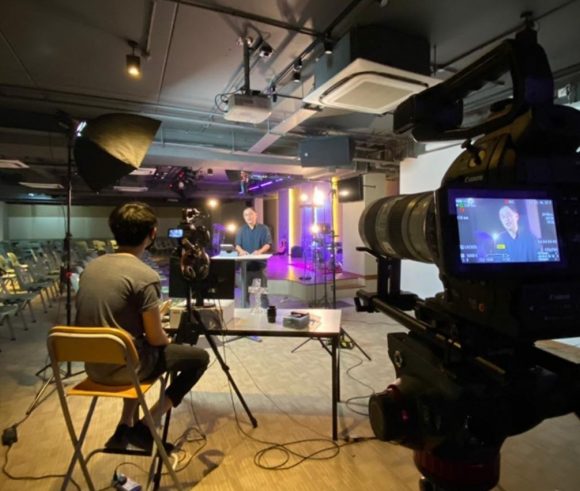 What we were doing during the Circuit Breaker stay-home period

Since the beginning of the circuit breaker (CB) the pastoral staff and worship teams have taken turns to record our songs, announcements and sermons from home and sent them to a strong media and editing team who then uploaded the pre-recorded, stitched-together online worship service. We have received good reviews and comments about our online presence, and are proud of the production standard, and have become quite used to doing it. Even though it was stressful and tiring. Stressful because we had to learn the skills of recording and that of preaching to an empty room. Stressful because the recording of songs and music and putting them all together was tedious and difficult. Stressful because putting together one service required thorough and long hours of editing. Not to speak of the meeting of deadlines.

In terms of recording and broadcast of religious services and prayers, the MCCY allows:

“Religious organizations (RO) are encouraged to continue supporting the religious needs of their communities via remote means such as recording and broadcast of religious services and prayers. In Phase Two, we will allow up to 10 persons on-location for these productions, of which up to 5 persons can temporarily remove their masks when speaking or singing. Those who are unmasked for speaking / singing are strongly encouraged to maintain at least a 2 metres separation from other persons. All other persons present must remain masked and maintain a 1 metre separation. The time spent on-location for this activity should be kept as short as possible. The production team must also put in place safe management measures, including no-cross deployment between locations (where practicable), no socialisation during breaks and thorough cleaning of technical equipment”.

When it came to worship services: “Places of worship may resume congregational and other worship services, starting with up to 50 persons at a time(excluding religious and supporting workers, which should be kept to a minimum), subject to safe management measure. “

And in a key stipulation:

How churches are responding and why

I think churches are generally happy that there is communication between the MCCY and that they are sympathetic with the needs of mosques, temples, and churches. Churches appreciate the feedback and clarification sessions that had been taking place. Churches share the same concerns as MCCY and want to co-operate and keep Covid 19 in check in our country. After all religious gatherings have been a hotbed for the spread of the virus.

While it is good that up to 50 can now attend worship services, most churches have not jumped in to begin gathering physically. There are many reasons for this inertia. Different churches would have different reasons for being hesitant and remaining unchanged.

Most churches have, through quite a struggle, found a rhythm of doing church online, and have even been doing it well beyond their expectations. Their congregations have also gotten used to tuning in to meetings online. Even the older generation have learned to tune in. Many like the commute-free and shorter services. In a way they are in their comfort zone.

Having taken so much trouble to get to where they are, churches would be hesitant to go back to physical gatherings when there is no certainty if these liberties may soon be taken back if the infection numbers in the community rise up. Why not wait and see? Why switch back and forth?

Anyway, many churches need time to get things ready for re-opening. The Roman Catholic churches want their members to stick to one church and not move around to other churches to prevent cross infection. But to round up volunteers and train them takes time, so each parish can decide when they will re-open.

We have to admit that the restrictions on singing does discourage the return to physical gatherings. Singing was a part of Christian worship from the beginning, but with the rise of clergy, congregational singing went off the grid until the Reformation, which brought it back to the churches that left Roman Catholicism. Today congregational singing plays an important part of Christian worship. Members learn theology, express their feelings and adoration through congregational singing, and though they may not know it, witness to God’s love and grace in song. So if there is no singing …. it’s not the full experience of worship they have been used to. I know this topic about how essential singing is to worship is debatable and you may want to comment on this. Feel free to do so below.

Another reason for hesitation is that there are churches that have to share space in one building, or have their own halls in the same building. There are many churches in this position in industrial buildings as well as in HDB sites like the ones in Yishun, Clementi and Jurong where two or more churches are housed in the same building. The MCST have to ensure that the different congregations in the building do not cross-infect each other via common areas like staircases, lifts, and common restrooms.  This also make churches in such situations think twice about meeting physically.

I would think a fuller experience of worship may be had at home where a small gathering of 5 church members joining a family at home, can tune in to online church service on Sundays and sing to their hearts content, and after that interact and share life authentically.

Our church has decided to gradually do all our recordings in church instead of from homes. We have begun with recording the sermons in church. This will be followed with all the worship songs being recorded in the church. In the meanwhile, we keep monitoring the situation, and prepare for the day when the church can re-gather physically. When that time comes, we will meet in church and have live streaming for those at home. We will also continue to leverage on technology to minister in prayer ministry and Christian education. It looks like Zoom meetings are here to stay.

I still do not know what the new normal will look like but from the looks of it more churches will be better off after the pandemic, for they had been forced into learning to leverage on technology, something it feared to do in the past. I expect churches will not discontinue some of the things they have picked up during the Circuit Breaker. Most will keep a stronger presence online than they had before. This augurs well for the “new normal” church!

What about your church or denomination? How are they responding to the new phase 2 circuit breaker re-opening?