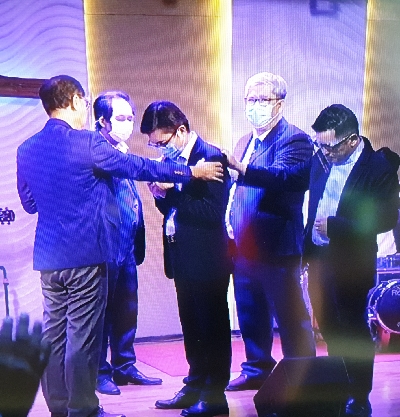 The ordination of Alvin Lim was certainly a highlight and delight in the month of November 2020. The Covid 19 makes all kinds of events unforgettable: a covid 19 ordination – what will it look like? We did not want it to be a non-event attended by 10 persons with all kinds of limitations, so we postponed it. However, when things got better and the government safety guidelines were loosened, and 100 were allowed to physically congregate, we decided to go ahead with the ordination. In addition, there was the deadline of my retirement: we had to do it before 19 November.

We had to limit the numbers who could attend. All the other measures like masks, temperature taking, two groups kept separated, no singing, a single entrance and exit for each group. Keeping safe distances all the time.

I began with a mask and later, for better communications, a full plastic shield. However, I had to make sure the microphone was under the transparent plastic shield when I spoke so that the sound is not muffled. The same goes with the Mandarin interpreter, who stood two metres from me, and the sign language interpreter who stood about ten metres from me.

This ordination service was pre-recorded and would be shown to all the three congregations on the 15th of November, the following Sunday, giving the hardworking media team about seven days to edit and upload it. I was glad that everything went smoothly.

From the beginning, the excitement in the hall was electric – partly because it was the first physical gathering since the beginning of the circuit breaker, and partly because it was an ordination service. All this while, our services had been pre-recorded from home initially, and later at the church hall. Now this ordination service would be the dry run for future in-person gatherings for worship.

Despite the restrictions, there was no blocking the anointing of the Holy Spirit. I felt strongly his presence during the service, when I preached, and during the liturgy, but especially when I laid hands on Alvin Lim the candidate, and prayed and prophesied over him. I was filled with joy, peace and contentment.

Another thing we did was to pre-record my retirement service. This was done after the ordination service. The congregation had a ten-minute break, and re-gathered for the second part, where some commendations, appreciation speeches and a presentation of ex gratia offering for me, and my thank you speech was pre-recorded. The highlight was the three congregational pastors representing their congregations and praying blessings upon me. After editing, the segment will be added to the service of another Sunday and screened to all three congregations. You can watch this segment below.