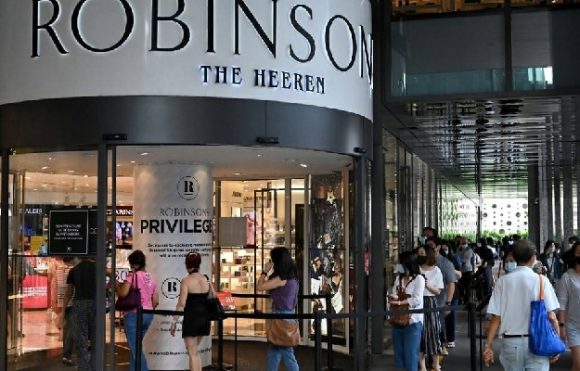 After Friday’s lunch at Shaw Centre, I went with my wife and a friend to Robinson’s, Singapore’s 162 year old iconic department store. There was a winding down sale. The dame has folded. The shift to online shopping and the covid 19 has taken another victim, with more to follow. I bought a pair of shorts for half-price and my wife bought two blouses at half-price.

NOT SO SWEET MEMORIES

Robinsons brought back many personal memories. I remembered being brought there by better off uncles and aunties as a school-going kid to experience the oohs and aahs of seeing an abundance of stuff you wouldn’t see anywhere else. My mum also liked walking there, even though she could not afford the rather expensive things displayed on the shelves. We could only afford things like bath towels and Airfix, the hobby kit that I was obsessed with, for gluing into plastic models of World War II aircraft.

I was so caught up in this hobby that I would save my pocket money to buy up different models. Once I was so overtaken by my lust for certain model aircraft, that I stole one or two at Robinson’s and put them among other items that had been bought. One was a Japanese fighter aircraft – the Zero. The other, I have forgotten.

I remembered how my heart palpitated as I walked out of the department store. I was relieved when I exited the entrance. It was crowded near Christmas time, so I supposed the security couldn’t cope. But my act of theft did not escape God’s eyes.

Many years later, I would accept Jesus Christ as my Saviour and Lord. As I followed Jesus in discipleship, I learned about repentance and restitution. Convicted about my past sin of stealing, I wrote a letter to Robinson’s department store and apologized for what I stole from them years earlier in a letter, with the estimated cost of what was stolen in cash attached to the letter.

Sometime later, I received a letter from Robinson’s with a receipt, informing me that they received my money, and were glad that I turned over a new leaf! For sure if I had a smartphone then, I would have taken a photo of their letter for keepsake.

Now whenever I looked back at this incident I realize it was an important step for me as a new believer to establish a clear conscience. I would one day be a pastor, and God knew that but not me, not at that stage of my Christian life. When God invites you or convicts you to do something, just do it. It is healing, strengthening and who knows how it may impact others?