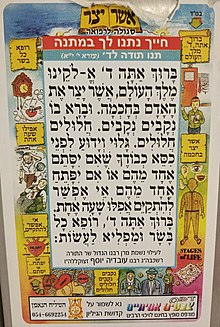 Shocking Prayer For After Excretion

Asher Yatzar. Observant Jews pray this blessing after urination or excretion. They recite the prayer after washing and drying their hands. It is called the Asher Yatzar. This is the prayer:

Blessed are You, Adonai our God, King of the Universe, Who formed man with wisdom and created within him many openings and many hollows. It is obvious and known before Your Throne of Glory that if even one of them ruptures, or it even one of them becomes blocked, it would be impossible to survive and to stand before You (even for a short period). Blessed are You, Adonai, Who heals all flesh and acts wondrously.

The Encyclopedia of Jewish Prayer

When I saw this prayer, I was surprised and embarrassed. I found it interesting that this prayer is prayed diligently by observant Jews after each urination or excretion. It shows the earthiness of Judaism. The Jews pray this in gratitude for health – that they are able to urinate and excrete. There is no tinge of shame or unseemliness in such a prayer, for to the Jews their faith is practical and embodied in physical existence too. They are right for indeed without these abilities we would be in deep trouble health-wise.

The Christian faith is earthy and practical and embodied. We share the same Old Testament scriptures with the Jews. The name of the prayer, “Asher Yatzar” literally means “God has formed man”. God the creator formed our human bodies with all its “openings and hollows”. Therefore we should remember and honour God’s creation, our bodies, and give thanks to the Creator when everything is working as it should. He deserves honour because He who created the majestic Milky Way and our planetary system, did not think it below him to worry about our ugly, smelly and tiny openings. He cares about every detail and design of our bodies – God be praised.

I read this interesting insight in a book Elaine, my daughter bought, and I borrowed out of curiosity about the title, “Liturgy of the Ordinary” by Tish Harrison Warren, that gives rich insight into how our boring activities of every day life sanctifies us. This prayer was mentioned in Chapter 3 which uses daily tooth brushing as its anchor metaphor.

Each time we excrete is an opportunity to thank God for health and to honour your body, his creation.