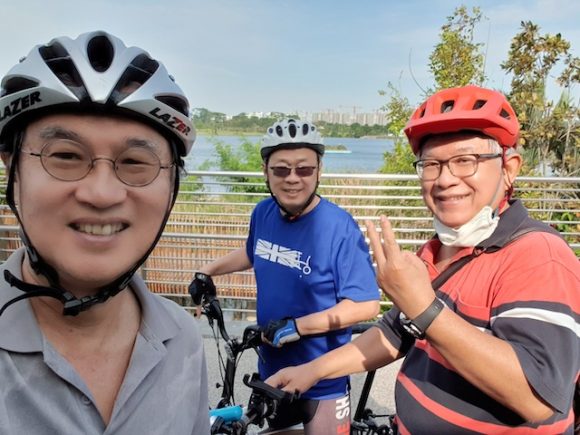 I first heard about Rowers Bay from Dr Jimmy Tan, a lecturer in Trinity Theological College. I saw lovely photos on a chat group and I decided I must plan a cycling jaunt there. So I enlisted two other pastors in transition to join me Pastor Eng Hwa, formerly of Praise Evangelical Free Church, and Pastor Richard Wong, formerly of Singapore Christian Canaan Church.

We met at Rowers Bay. I parked there and unfolded my Brompton. Eng Hwa rode from his home for 30 minutes to get there. Richard rode his Brompton to a MRT station on the North-south line and stopped at Khatib MRT, unfolded his Brompton and rode to the destination. On the way back, I gave Richard a lift, and two Brompton bicycles could fit into the boot of a Toyota Allion. One of the beautiful things about the Brompton bicycle is its simple, compact, elegant fold that can be transported on the bus, train, car or even a plane.

I was stunned by the blue of the Lower Seletar Reservoir, the cool breeze and gentle morning light. It felt like I stumbled into a hidden lake. I felt I could idle on a bench and bathe in that charming atmosphere the whole morning. But that had to be left to later. My friends arrived and we left for the Hampstead Wetlands Park via the park connector.

The Wetlands Park was a small lake carpeted with water lilies, and surrounded by lush mature trees. Here I felt like an intruder. There were many birders with their mammoth cameras on tripods waiting patiently and quietly for that timely bird shot. We were a bit too noisy for them I think. They probably resented us. We were ruffling their feathers with our posing and selfies and wefies. It felt a wee uncomfortable and I was relieved (and so were they) when we left for nearby Brompton Road.

I didn’t want to go there there again but it was nearby and pastor Richard wanted to take a lovers’ picture there of his titanium Brompton with the Brompton Road street sign. It seems to be a ritual that distinguishes the genuine Brompton lovers from mere admirers or owners. I didn’t buy that myth but I am easy on such non-essentials, and went along for fun.

Interestingly, we had tea at a vintage attap kopitiam called BOH GEH (Hokkien dialect meaning “toothless”). It serves economical food for the employees of aeronautical companies in the Seletar area. We sat outside with coffee and “tua pau” (big pork buns) and talked about our transitions, sharing life honestly. Five years earlier, I had been there with pastor Richard and I was certain, though he was doubtful. Deja vu. I went to my blog and searched out this blogpost HERE. I saw a picture of a round marble table with chairs and a yellow metal three seater and I showed it to him as final proof that this coffeeshop was the same one we went years ago.

We rode further to visit a bicycle themed cafe called Soek Seng 1954 at the side of a warehouse or factory. I was surprised at the attention that went into the gorgeous interior design of the cafe and took many pictures of the cafe. The coffee and the food there was above average too. Our conversation was dominated by talk about the fall of Ravi Zacharias. Our discussions surfaced the organisational, theological and spiritual issues arising from the sad and shocking moral failures of the world-renown apologist. God willing, I will write something about this. I am still reluctant to read the detailed investigation reports. I don’t have the stomach for reading such sordid stuff. And if I write my opinion without reading the investigation report, wouldn’t I be dismissive of the gravity of the sins?

By the time lunch fellowship ended the sun overhead was bearing down on us intensely and we rushed back to Rowers Bay and from there went our separate ways.