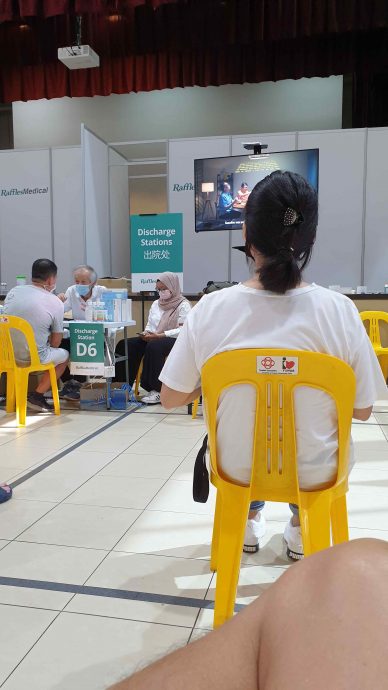 I Received the Pfizer Vaccine as a Gift from God

On Tuesday, I received the second dose of Pfizer vaccination in the Yuhua Community Center. As usual, the process was very safe and efficient – something I do not take granted for and am always thankful for. I was generously given a box of face masks and a bottle of hand sanitizer. I had a sore upper arm and some flu-like aches on the day after, but today I am rather fine and continue to monitor my body.

Months back I had thought I did not qualify because of an allergy.  My late mother told me I had allergic reactions to penicillin when I was a primary school boy. What kind of reactions, I cannot remember, and even if mum was alive, I doubt she would remember. I assumed that the jab was not for me and it was not at all a consideration. However, as the vaccination was implemented starting with the elderly, and as people started to think about it, I too started to seriously consider it.

There were many anti-vaccination material and horror stories circulating on the internet and through WhatsApp messages. A neighbour said receiving the vaccination is receiving the mark of the Beast. A cousin shared a story of a friend he knew who died from heart failure after the second jab. Perhaps instead of a direct cause and effect, it could have been sudden death from hidden heart condition. However, there were also informative articles and videos that propounded that it was good and safe and a social responsibility to receive vaccination. One that I found personally helpful was circulated by a Methodist TRAC seniors ministry recording of a Zoom seminar that debunked many misconceptions about the vaccination (which I cannot seem to find now, or else I will surely link it here). Many factors had to be considered and it became too murky for a quick decision.

However, I began praying about whether I should receive the vaccine since I could not remember what my allergic reactions were. If it had been very serious, I would have landed in hospital and my mum would have underlined that fact, “You know you ended up in the hospital for three days! You could have died!” or something along that line. But I could not remember any of such. What should I do with such inadequate information about my allergy?

During a routine medical check at the polyclinic I shared with the doctor about the quandary I was in. The doctor’s reply injected peace. She said the reaction need to be somewhat serious, with for example swelling as well as breathlessness. That got me praying more until I felt God’s peace about receiving the vaccination.  This was a kind of peace that could withstand news of negative effects of vaccination and the opinions of others who plan to wait it out and let the early adopters be the guinea pigs.

I have become one of those informed and forewarned guinea pigs albeit one with peace in his heart.  I received the vaccination as a gift from God.

Into your hands I commit my spirit and body, Lord Jesus Christ, giver and keeper of body and soul. Amen.