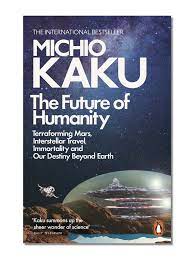 Home   »  Book and movie reflections • Gospel, theology and story   »   The Future of Humanity: life on Mars?

The Future of Humanity: life on Mars?

It is quite fascinating to read a book like Michio Kaku’s “The Future of Humanity”. It is full of interesting details about outer space and the possibility of human beings becoming a multiplanet species that can colonise Mars and other planets. This is not a review as I have not completed the book but an off-the-cuff reflection on some of the things I have read thus far.

I felt astounded by the arrogant assumptions and imaginations of migrating people to other planets, particularly Mars, and the sheer amount of money that countries and private citizens were prepared to invest in their pursuit of this vision. I felt equally saddened that such energy, vision, passion and resources would not be harnessed to practise love of our poorer neighbour countries and human community. I find it tragic that a richly resourced country like the USA, and billionaires like Elon Musk and Jeff Bezos have visions of conquering space and colonising Mars instead of redistributing their wealth. Visions with love of neighbour is always greater, grander, nobler and more inspiring and leaves unforgettable legacies. I suppose human nature being what it is, we should not expect from humans anything more than the pursuit of self-interest.

The reasons for making humans a multiplanet species is the supposed danger of earth’s extinction. Possibilities of self-destruction include global warming, modern nuclear as well as biological warfare, and an expanding population with limited resources. Then there are natural disasters we have no control over, like pandemics (covid-19 came after the book was published in 2018), onset of another ice age, colossal eruption of the super-volcano under Yellowstone National Park, future meteor and comet impacts on earth, and the expansion of the sun. Escaping to another planet would be the Plan B and Mars currently seem the best candidate for forming a human colony before earth becomes extinct.

The way I see it there is no need to do all this. The future of earth and humanity is already clearly and plainly revealed for us in the Bible. Let me quote a few passages of scriptures regarding this. Jesus in answering a question the disciples asked, “What will be the sign of your coming, and of the close of the age?” said to his disciples: “For many will come in my name, claiming, ‘I am the Messiah,’ and will deceive many. You will hear of wars and rumours of wars, but see to it that you are not alarmed. Such things must happen, but the end is still to come. Nation will rise against nation, and kingdom against kingdom. There will be famines and earthquakes in various places. All these are the beginning of birth pains. Then you will be handed over to be persecuted and put to death, and you will be hated by all nations because of me. At that time many will turn away from the faith and will betray and hate each other,and many false prophets will appear and deceive many people. Because of the increase of wickedness, the love of most will grow cold,but the one who stands firm to the end will be saved. And this gospel of the kingdom will be preached in the whole world as a testimony to all nations, and then the end will come.” (Matt 24:5-14)

Peter the chief of the apostles of Christ had this to say about the end of this age: “But the day of the Lord will come like a thief. The heavens will disappear with a roar; the elements will be destroyed by fire, and the earth and everything done in it will be laid bare. Since everything will be destroyed in this way, what kind of people ought you to be? You ought to live holy and godly lives as you look forward to the day of God and speed its coming. That day will bring about the destruction of the heavens by fire, and the elements will melt in the heat. But in keeping with his promise we are looking forward to a new heaven and a new earth, where righteousness dwells.” (2 Peter 3:10-13)

Both passages speak of a frightening and climactic period of great human distress, natural disasters and destruction leading to the final and glorious appearance and coming of the Lord Jesus Christ to rule an earth that has been purged and regenerated by God’s power and creativity into a new heaven and new earth where justice and righteousness will be established.

The future will not be life on Mars, but life on a renewed heaven and earth for all of God’s people.

This is my firm belief too, so reading this fantastically put together future of life on Mars, while thrilling and astounding, left me feeling déjà vu, like viewing in slow motion another Tower of Babel ending about to unfold.

Lord GOD, You control the future of humanity and what it looks like has been revealed by Your prophets. We pray for wisdom to live with this revelation in mind, as we look forward to the coming of the Lord Jesus Christ to consummate the end of this age. Amen and Amen.

Share this:
Book and movie reflections, Gospel, theology and story coming of Christ, End of the World, The Future of Humanity