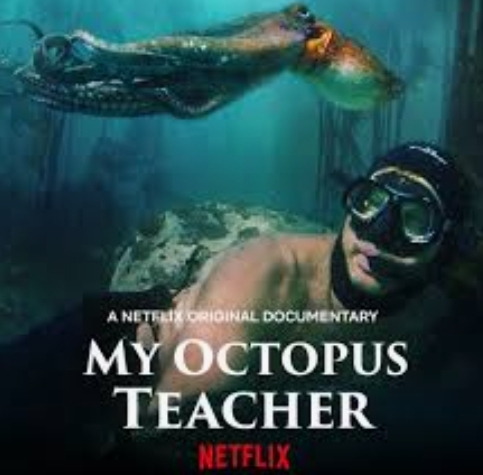 What I learned from Netflix’s “My Octopus Teacher”

Initially, the title turned me off from pressing the play button. “What could this be about?” Probably a documentary about the eight-legged mollusc similar to a Korean dish called sannakji, killed and eaten raw. Not very appealing, as I recalled my culinary experience of having moving tentacles in my mouth.

However, a month or so later, on an impulse I pressed play and was hooked on the film from its beginning to its end. As it turned out, this mollusc is of a different variety than the “baby octopus” that Koreans serve on a metal plate. It has to be, for the award-winning documentary’s lead actress was a much bigger, more intelligent, lady octopus that a burn-out filmmaker Craig Foster fell in love with.

I was delighted with the film for many reasons. I loved the way the documentary conveyed interesting information about the octopus in a story of a man’s transformation. I was amazed at how beautifully and gloriously and painstakingly the filming underwater had been done – the seascapes, the dancing kelp forest, the colourful fishes and corals, the snappy sharks, the strange looking crustaceans and the editing ….oh my how many manhours of filming and editing it must have taken. I loved the happy resolution of the early tensions: the burnout man went back to filming, found meaning and started a conservation NGO, and drew closer to his once-distant son. If this was done by a Korean director, it would have shown something about how his relationship with his wife worsened during his burnout and his obsession with the lady octopus (daily for 300 days he eagerly sought his undersea mistress), and how it was finally patched up. Yes, please do a part 2 and show us what happened with his wife.

As I reflected on this film, I realize I too can learn a few things from this lady octopus. Well for one, the film points me to a Creator who created all creatures and the environment they live in – made so that every creature, including the crown of God’s creation – the human being- has a role in this my Father’s world. I cannot help but praise the Father for the way he created lady octopus with such artistry and genius, and this is but one tiny creature of the ocean’s floor.

This is my Father’s world

And to my listening ears

All nature sings and round me rings

The music of the spheres.

This is my Father’s world

I rest me in the thought

Of rocks and trees

Of skies and seas

His hand the wonders wrought.

(hymn: “This is my Father’s world”

Second, it shows me how human being’s relationship with God’s creation should be one of wonder, respect and intelligent care. Having formed a kind of recognition and understanding with the lady octopus, I doubt the protagonist would consider putting his lady muse on his dining table like any Korean or Chinese would, but I would not stop eating that slice of octopus on a sashimi plate. God has given mankind all of creation – plants and creatures – as food, so I have no issue with dipping that slice in the sauce and putting it in my mouth. What we eat and how we eat is a matter of culture but sustainability and stewardship must surely be an important part of God’s intention for all mankind to acknowledge, and part of the Christian’s responsibility to steward.

IN CHRIST WE ARE MADE WHOLE

Third, we can all get healed and whole. The octopus lost one of its eight tentacles to a shark attack. It went into a hole, grew weak and ill, but as it hid and rested in the silence, the fresh wound healed and a new tentacle began to grow out, and with time the lady octopus became as energetic and whole as before. In Christ the rock, we can find ourselves renewed, in rest and silence and retreat. I have been there before and if you have read my other blogposts about the retreats I had gone and received healing and wholeness, you will understand why I identify somewhat with the lady octopus.

Fourth, I am reminded that there is an enemy and we have to be armed with tactics for protection and to overcome his attacks. The film directors gave us a glimpse of this defence tactic at the beginning to stir our curiousity and later revealed that the soft mollusc used hard shells from the seafloor to cover itself both as camouflage and as a hard shield against the shark’s teeth. I am reminded of the need to realise that while we are grateful and enjoy God’s beautiful and plentiful world, there are dangerous enemies that wield sharp weapons that can fatally hurt us, so we need to have a proper defence and vigilance: “watch and pray that you will not fall into temptation”.

Fifth, this octopus film is very instructive of preaching. To be able to preach in the form of a story is an art. Not every sermon can be preached this way: begin with the tension and problem (a burn out filmmaker) and slowly introduce other characters and factors (the kelp forest, the octopus, other sea creatures, the protagonist’s son) that would bring a resolution of the tension/problem at the end. Some sermons are better preached like a film, with a storyboard, rather than with a thesis followed by a deductive three point outline. Such sermons will surely hold people’s attention, especially the younger digital natives generation that grew up on films and stories in its manifold social media forms.

If you have not seen this Netflix documentary, may I encourage you to watch it. After watching it, the story stayed with me for a few days, showing me, teaching me. The Father used all kinds of things to teach Jesus: lost sheep, lilies of the field, the farmer sowing and ploughing, etc. and he can use a film like this to teach us lessons that are tailor-made for each of us and will surprise us too.

If you have already watched this film and it impacted you, do share with us what you have learned from watching this film in the comment box. God bless you.

Father, thank you for your glorious creation. You have given us a wonderful treasure and gift. Help us to appreciate, value and steward it with respect and intelligence and determination. Let your creation continue to sing your praises and testify of your goodness and genius. In Jesus’ name we give you praise.