In memory of my mum, Ada Law 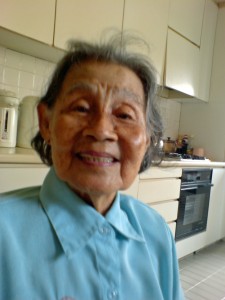 No man is poor who has had a godly mother. -Abraham Lincoln

One year ago, mum went home to be with the Lord on the morning of 28th October 2008 (Tuesday) at the Salvation Army Peacehaven nursing home. Mum suffered a massive stroke the previous Sunday, and the doctors told us that at age 85 she could not survive an operation, and that she did not have much time left. They were right. We were ready as a family to see her go, and together with our sister who flew in from Germany, and the grandchildren, we gathered around the hospital bed and one by one expressed our goodbyes with words, tears, gestures and prayer . We now thank the Lord that she slipped into glory peacefully and with dignity.

Mum was an organized woman. She kept 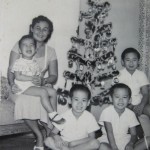 the home very well. She knew where to find every kitchen utensil and the home always looked neat and clean. The linoleumed floors were handwashed and  the windows were cleaned regularly.

She also enlisted everybody at home to do all the household chores and I guess with five kids, four of them boys, she needed management skills to survive. There was a regimen at home and we had homework time and play time that had to be adhered to. The 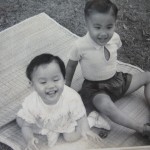 carrot and stick worked well to maintain discipline at home.

The kitchen was full of savory scents that made us salivate. We looked forward to mealtimes as she cooked and whipped up fantastic curries, ngoh hiong, chili crab, roasted meats and chicken stew to name a few. Her signature pineapple tarts and butter cake were popular fare among relatives and neighbours as well. As children we delighted in her homemade kaya, coconut candies, tapioca kueh and jelly desserts. All these she managed on a tight budget.

She was a fine seamstress and used to tailor-make dresses for clients. This was a supplementary source of income for the family. She held dressmaking classes in her home for some rich tai tais of the Shaw family. Besides seeing her over the stove, an not uncommon sight is of her with a measuring tape over her neck, bending over a cloth with a scissors. Later on her skills were put to great use at St Andrew’s Cathedral where she embroidered and maintained the various stoles and linens used to dress the sancutary for the various Christian seasons. That was her ministry with the Thursdayladies fellowship.

I remember how she even made curry powder and sold them in packets. She didn’t make much from this but she took pride in it and was meticulous about the quality and cleanliness of the spices and ingredients. On occasion, I grudgingly helped her carry big packs of dried chili to the Indian grinders and mixers.

She was thrifty and saved and maximized whatever she had. We always had enough for the basics, including tuition for Maths and Mandarin(which did me no good). Her life was generously poured out in the endless sacrifices she made for her children, even after we got married.

Mum had a pleasant disposition. She was characterized by quiet and calm, patience, and longsuffering. However, she disciplined us with firmness tempered with flexibility, giving us space as we grew into teenagers. Her love could be too tough to the point of frustration. I wince with embarassment when I recall how she once went to the community centre basketball court and in front of my friends, called me home for I was skipping dinner to play ball. 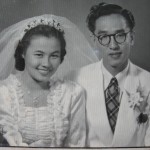 Her dad was an Anglican and she married my father, Andrew Chee, in St Andrew’s Cathedral but they were not churchgoers though they allowed the children to attend the then Bukit Timah Evangelical Free Church Sunday School when we were young.

When the marriage hit turbulence, she experienced a turn of piety and used to go to Novena on Saturdays to pray. Besides recourse to prayer she had wonderful relatives from both hers and fathers side who generously gave her support and practical help, and this helped her to persevere. Later, she joined the St Andrew’s Cathedral ladies fellowhip, which met on Thursdays, and this was the period where I was pleased to see her faith in Christ renewed and deepened with Bible studies, ministry and the warm fellowship there.

Triumph of faith over dementia

She was also a regular in the St Andrew’s early morning services and even after the onset of dementia, she still went to church regularly under the watchful eyes of Amy the domestic helper, and Lily her sister.

Even when she couldn’t recognize us she would still say, “God bless you”, or remember songs like “Jesus loves me this I know”. Even after the geriartician said her memory has gone zero, her helper Amy saw her woke up in the middle of the night and prayed the whole “Lord’s Prayer” and on another night witnessed her looking out the window and praised God, “I love you, Jesus, I love you Jesus.

Her faith in Christ, and her temperament made her Alzeimer dementia a sweet one. She would often brush her hands on our cheeks and greet us and strangers with a “You are so pretty”. With this kind of temperament, the great caregivers at Peacehaven’s Flamingo found it pleasant to care for her. 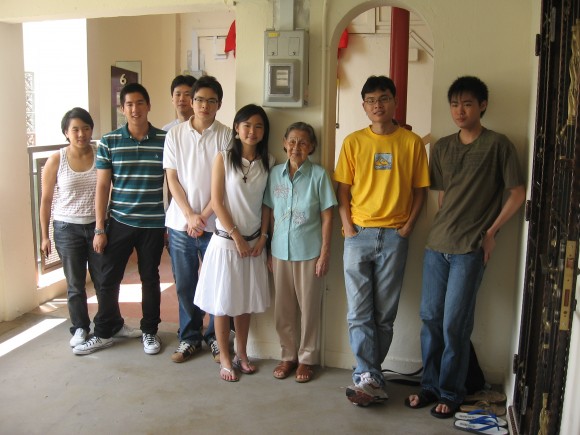 Mum left behind four sons, Colin, Julian, Victor, and myself; three daughters in law, Linda, Ai Lee, and Jenny my wife; and one daughter, Beryll (Joyce). And seven grandchildren: Olivia and Keith; Noah and Nathan; Joshua, Matthew and Elaine; all of whom were cared for by her during the early months of their life.

How do I feel now after a year? Less in pain than when her condition was deteriorating rapidly a few years ago. Maybe the grief from her death has been deeply repressed. Memories of her remain strong though. I am grateful for the legacy she left us.

I rejoice knowing of the hope of resurrection we have in the Christian faith. I will see her again face to face.