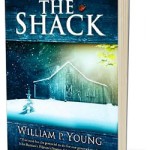 Share this:
Book and movie reflections book opinion, The Shack