Over 450 fans of Philip Yancey, popular Christian author, filled the ACS Junior School auditorium with lively anticipation. Each seminar participant held a plastic file of notes titled “3 Keys to Quality Writing” and each clutched a two-in-one gift book by the author,” The Jesus I Never Knew” and “Disappointment with God”. I spotted Conrad Raj, Jenni Huan, Alfred Yeo, Stillhaventfound, Sarah, and sat with Didi. Hmmm…so Conrad Raj, the journalist, is a Christian. Present also were several acquaintances from last year’s Armour writing workshop: Ricky, Ali Smith, Lindsay, Linda and a few other familiar faces. Two of them have finished writing their books. 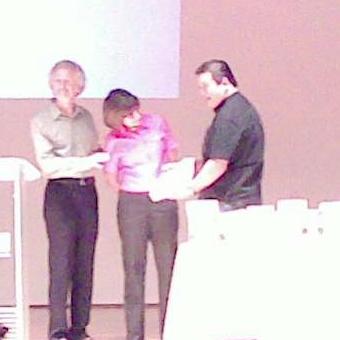 Philip Yancey looked as though he came out of Shenton Way, neatly dressed in a long sleeve grey shirt (without a tie) and black pants with black belt. Everything was in place – including his Afro hairsytle and trimmed beard. He reminded me of Garfunkel, the singer. His two talks were conversational and folksy and his anecdotes and advice had an attractiveness that’s charming and almost hypnotic. This is one accomplished author who is an inspiring speaker too. From 9am to 12pm with a fifteen minute break, he taught, dialogued, and carried an Q and A time. Listening him was like watching a good movie.

During the Q &A time, I waited for my inquisitive question to be asked. “How much money do you make as a writer?” His answer was that he has been very blessed in that respect and that he could even start a foundation to channel royalties to charities.

Movement, he said, was one of the 3 important keys to quality writing.  Good writing keeps the people moving forward like a gravitational pull. He identified one the three gravitaional pulls as “suspense” such as is found in most good stories.  The passage of time, a sense of mortality and materiality are elements that make a story seem real, and the suspense taut.

A piece of writing that has movement is one that discloses movement taking place within the writer. He spoke of a book he read, “Yellow Wind” and how it moved him as he identified with the Israeli author’s emotional conversion as he interviewed suffering Palestinians. The author documented his feelings and how he was moved to a different point of view, and it moved Yancey too. This is the second and third gravitational forces: movement within the author and reader.

Besides movement, the other two keys he touched on was: “Finding your unique voice”, and “Finding a form that fits your message”.

One tip I picked up was to not use the verbs to be. Weak. Avoid it like a virus. This should require my diligent application, until it becomes second nature. Good writing requires good sentences. Mine are sloppy.