Aldersgate Methodist Church: keeping tradition and yet stepping beyond

In the wrong place

It was a traditional service, but it took a step beyond the traditional.

Like clockwork it began at 8.30am and ended at 9.40am. That’s about an hour and a quarter, with the eucharist included. This was Aldersgate Methodist Church. It had been a long time ago when I last attended a Methodist service in 1981 when I was a seminary student.

I was early and ended up in an empty auditorium in the Fairfield Secondary School. Good thing an early parishioner told me that I was in the wrong place: they were the Holy Covenant Chinese Methodist Church.

When I entered the right church sanctuary five minutes later, in the primary school,  I felt the warm browns of wooden pews. There is something about wood that conveys stability and tradition. This Sunday I chose to attend the earlier traditional service rather than the contemporary service at 10.15am. 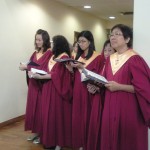 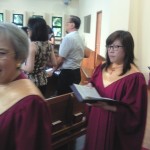 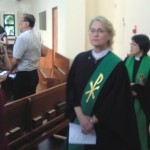 In keeping with tradition and yet

After three violinists finished the prelude, the procession was led by the choir singing as they walked in redemptive red robes. The service continued with a call to worship and an old hymn, “O God Our Help In Ages Past”.

Then they did what I thought was a beautiful thing to do, something you do not traditionally do. Beyond praying for the world, and the growing rich-poor divide in Singapore, they prayed for their “competitors”. They blessed and prayed for the churches around the Dover/Buona Vista area, which included 3 other Methodist churches, St John’s –St Margaret’s Anglican Church,  Shalom Baptist Church, Ebenezer Church, and even one that has yet to move to the area: the New Creation Church! And all these before praying for their own church needs! This 5 minute prayer said more to me about brotherly love and the unity of the Body of Christ than a hundred sermons. I very like it, to use Facebook lingo.

This was followed by the collection of the offering, and giving of announcements and the confession of the Nicene Creed. 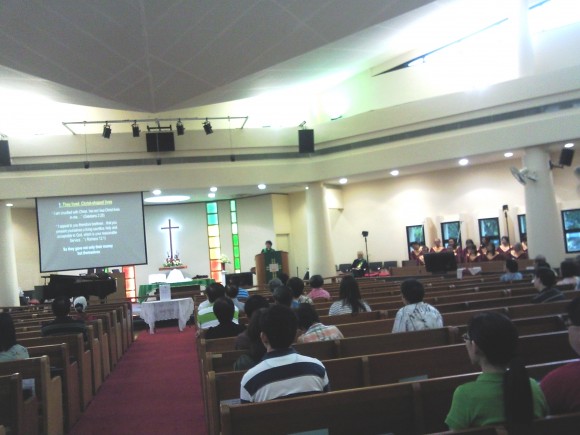 Rev Dr Lorna Khoo had been in this new church assignment for about seven months and like Nehemiah had probably been just going around the city walls and surveying them before initiating changes. From the bulletin information you could see that she had begun to pray seriously about the region or parish that Aldersgate is in. She stood up and spoke a message about giving because it was a Pledge Sunday. It was an exposition of  2 Corinthians 8: 1-15 given succinctly in 15 minutes. Despite its compactness, it was filled with biblical goodness and clear powerpoints. The insight that interested me most was viewing the grace of giving from the angle of justice, an aspect of stewardship  that is seldom highlighted.

The Eucharist was conducted prayerfully with liturgical efficiency. The participants went forward to the kneelers in the front circling the stage. There they received the elements that had been blessed and partook of it with devotion.

The contemporary service usually attracted about 350 people, younger ones, but the traditional service attendance was about 150 faithfuls in the 45 plus age bracket. However, on this Sunday I could see that the congregation has thinned due to members probably out on a long weekend holiday in addition to the National Day holiday on Tuesday.

Brunch was on my mind and my right hand was full as I left the church doors out into the school carpark into the morning drizzle. I carried the Sunday bulletin, the Methodist Message – a denominational magazine, and Rev Dr Lorna Khoo’s book, Wesleyan Eucharistic Spirituality, which I bought from her.