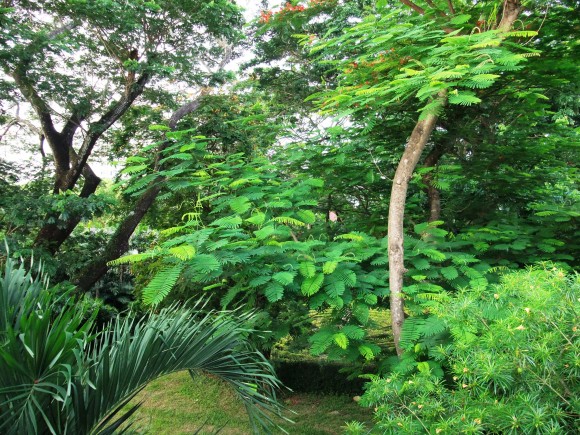 Despite divine assurances that this lengthy retreat would do me good, it was with some apprehension that I settled into the room 212 that would be my home for thirty five days. Air Asia had flown me into Chiang Mai, Thailand, at about eleven plus, and I was glad to be at the Seven Fountains retreat centre before midnight. All the rooms in the block had been renovated with attached bathrooms and I was the first guest to enjoy it. When I awoke the next day, a beautiful balcony view welcomed me. A huge raintree and a flame of the forest spread their gracious branches to hug me. Energetic squirrels, mynahs and butterflies looked for breakfast. This is the day the Lord has made and I will rejoice and be glad in it. 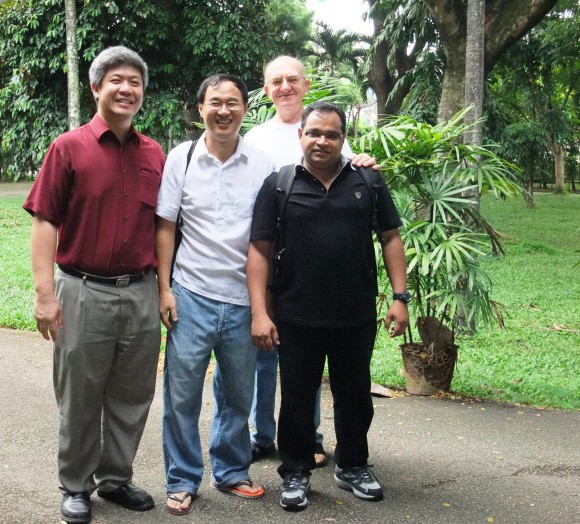 Together with others on a journey

The last meeting I had with David Townsend was in November 2010. He was directing my ten day retreat. My apprehension still lingered as we caught up with developments in the centre and what’s been happening with me. He gave me a well known passage to meditate on. It’s about God’s care for us and our value in his eyes being much more than birds and lilies. Another passage from Psalms said, My meditation of Him shall be sweet, and that was the word that dissolved my apprehension.

Later in the day, I bumped into the other two retreatants, Gregory Chan and Peter Anthoney, both Malaysians and final year seminarians. Over time a bond would develop amongst us, despite the solitude and silence, for we were going through a similar retreat program.

Many wonder how people can be in prayer, solitude and silence for many weeks. Most cannot keep silent for even a day.  I too wondered. Thus my early twofold anxiety: Will I be able to bear the lengthy solitude? Will it bring about the rejuvenation of a burnout pastor? Will the Lord accomplish his gracious restoration work? 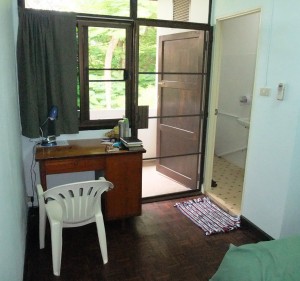 The schedule of each day was rhythmic. Three to five periods of an hour or more each were set apart for meditation, prayer and journaling. Meditation was mainly on Gospel passages and a few other contemplative exercises. The daily 40 minute morning meeting with David, my spiritual director, would be followed by one period; after lunch there would be two periods; and after dinner, one period. Meals were at 7am, 12 noon, and 6.30pm. Filling in were the naps, the jogs and walks, reading Men in White, a book about Singapore’s ruling party, enjoying nature at the grounds and at the Huay Khaew reservoir. The mind and heart were gently and imperceptibly led into a momentum of prayer that gave me a sense of progress, and gave me a booster when I hit the wall.

Weekends were welcome as they seem to give a feeling of lightness and change. There were the Sunday services in Thai and English in the chapel of the retreat center. It was different from the weekdays: more people both expatriate and Thai could be seen on the grounds. The food was sometimes very special or way below par.  The streets and Chiang Mai university seemed empty and sluggish. It felt less intense during the weekends.

School of discipleship, prayer and discernment

How would I personally describe the retreat program? It was a school of discipleship, prayer and discernment. God’s love was revealed through creation and redemption. This love was magnified as it was contrasted with human sins and weaknesses disfiguring all of creation. The meditations and prayer covered creation and fall, incarnation, the life and ministry of Jesus, the passion week, the resurrection appearances, the ascension, the coming again and Pentecost. A persistent focus was on seeing Jesus more clearly, 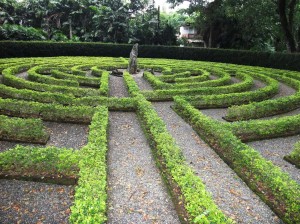 loving Him more dearly, and following Him more nearly. At several points in the retreat the challenge of discipleship came to the foreground: as you have viewed and experienced God’s vast love in meditation and prayer, what is your response? Romans 12: 1 was in operation: in view of God’s mercy, I offered myself as a living sacrifice. Consecration of all that I am and have naturally followed when I experience the grace of God afresh. It was both struggle and grace as I came to finally pray, as Jesus did in Gethsemane, Father, not my will, but Yours be done.  To be willing to do whatever He wills, at whatever the cost, for the greater glory of God was the end point intended.

It was also a school of prayer as I would learn to pray with the imagination, with honest feelings, with reverence and depth. There were no “How to’s” or techniques taught.  Prayed as you can, not as you should or must, is one of the memorable gems that the 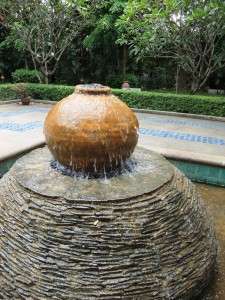 director underlined in one of the sessions. So with whatever knowledge or experience I had thus far, I went on my knees or sat and prayed.  Learning to discern the spiritual movements in my heart and how to make better decisions is another growth area for me. This was relevant and interesting and it helped me see the important role of discerning of spirits in the church, and resulted in a strong personal desire for this grace-gift.

The Lord was gracious and faithful and He ministered to me directly in prayer and meditation. Like a shepherd He tended to me. He made me lie down in a restful atmosphere and feed on nutrient rich pastures and still waters. He restored my soul. He showed me the right path to take and promised to be with me through thick and thin. He dealt with the past, filled me with His presence, and gave me hope for the future.

The immediate effects of the prayer retreat is best described metaphorically. It felt like a 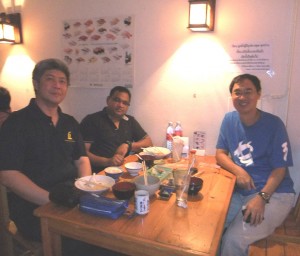 spiritual re-configuration had taken place. Changed focus, increased knowledge and awareness, spiritual aliveness and alertness, and rejuvenation of my desires to serve God’s people. A better operating system was installed. To change to a geographical metaphor, the tectonic plates of my soul have moved and the fault lines have closed. Revived, re-configured re-commissioned, and ready to go in peace and serve the Lord.

It took thirty five days to complete my retreat program. The first few days was for preparation and the last one or two was for reflection on and thanksgiving for what the Lord has revealed of Himself and had done in me.

Having my wife around and Juniper Tree 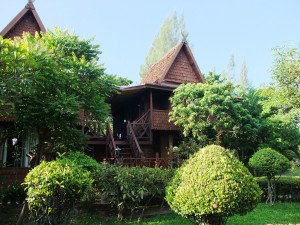 My wife joined me for a short prayer retreat and vacation at the tail end. It was wonderful to have her with me as I unwound in the last few days. She enjoyed her three day prayer retreat with another director, Puspo.  At the same time, it was good I could show her around some of the interesting places outside Seven Fountains,  and fete her with Japanese food at the popular Tsunami restaurant nearby. Later we moved to another place in Chiang Mai called the Juniper Tree. From there we idled, and shopped at the large Airport Central Shopping Mall and the night bazaar. The Juniper Tree was a small hotel with a swimming pool bought over by a ministry that sought to provide a place for cross cultural missionaries to rest, recuperate, and be refreshed. 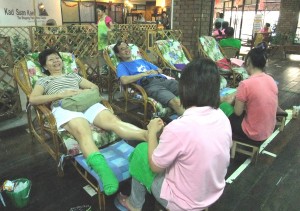 Elijah suffered burnout and sat under a juniper tree and the angel fed him with food and he slept under the tree. Many of the missionaries I saw there were Caucasians serving in various countries in Asia. Many came to rest and be refreshed and unwind from the stresses of their cross cultural work. Some came because of medical needs, and two were about to deliver babies. One or two came to renew their visas.

Back home I continued in my reflections and readings of books on the spiritual dynamics of the retreat program, spiritual direction, and the discerning of spirits. A friend, pastor Seng Chor had given me a book titled, Sacred Listening – James Wakefield, a Protestant  adaptation of the retreat program for lay people who cannot take a full 30 days retreat. The program runs for 6 mothns requiring an hour and a half everyday 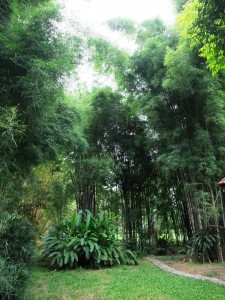 for the exercises. Adapting what I experienced for church use would be a useful project for me to work on. Furthermore, recently, the recommended book list for my third AGST master’s module (Spirituality and Faith Development) arrived and I am now beginning to read and enjoy the stuff:

To Know As We Are Known – Palmer

………..and many other readings. Looks like another enjoyable and enlightening module awaits me in the middle of September. That would be the last month of my sabbatical. October first, by the grace of God, I will be back shepherding the flock with renewed heart and mind and body.