A tale of two Preachers 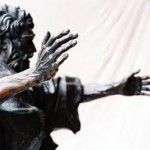 A Preacher took the text and preached a rousing sermon on prayer one Sunday and exhorted the congregation to pray thirty minutes on waking every day that week. And some did and felt good, but most did not and felt short.

The next Sunday, he preached a tremendous sermon on being a witness and challenged his members to witness to one person in school or in the workplace that week. Some did and felt good, but most did not and felt short.

The following Sunday, the Preacher motivated his members to love their wives, and he did it with tears, and confessed his lack, for he had been too busy as a pastor, and he was sure others were the same. So he gave them seven things to do to love their wives. The women loved the sermon. Many men walked down the altar with tears and arose resolute. That week roses were bought, love letters were written, and romantic dinners were had. Some felt good, and those that were still too busy, felt short.

On the last Sunday of the month, the Preacher was convinced what the members lacked was time management. So he talked about the tyranny of the urgent, and underlined the importance of keeping the main thing the main thing. He listed five things they could do to manage their time better. The members were perked with hope that if they could do the list, the nub of many problems would be solved: they would wake up to pray; they would have time to witness, to love their wives, and be a better disciple. Some did it, and felt good. Most of them fell short.

And by the end of the second month those who felt good about waking up to pray no longer thought of themselves as good Christians, for their habit faltered. Those who witnessed did it only that one week. The flush of renewed romance of those men who loved their wives had chilled. And the weekly schedule in the diaries was blank. That Sunday the Preacher looked over the congregation and saw a jaded people. They looked like a people weary of religious must do, ought to do, and should do. The trust that began their relationship with God has given way to earnest but relentless attempts to reach and maintain the C+ of Christian behaviour. They now felt weary. After some months the Preacher left the church with his shoulders slouched, his face downcast, his eyes absent of the gleam with which he started.

After several long months, the congregation found another Preacher. On the first Sunday, he preached Christ the High Priest who sympathized with man’s weaknesses and who offered Himself for the forgiveness of sins. The congregation felt the love of God and they experienced a cleansing peace and assurance wash over them. They had a new found boldness in approaching God in prayer, and though they had not prayed every morning, no pall of guilt hung over them.

The next Sunday, the Preacher exalted Christ as the Baptizer of the Spirit. The people received a fresh infilling of the Spirit, nothing emotional, more a faith thing. Strangely at the cell group that week, there were numerous reports of how members had opportunities to share Christ and pray for the concerns of friends.

The following Sunday, the Preacher talked about the length and breadth, and height and depth of the love of Christ as pictured in the Song of Songs, and the people experienced a new sense of being the Beloved of God. That experience of being loved stayed with them and they found themselves feeling affection for their spouses and children, and being patient towards the people at school and at work.

On the last Sunday of the month, the Preacher talked about the Jesus the Good Shepherd in Psalm 23 and the people were re-assured that God was watching over their ins and outs, guiding them with His staff, protecting them from all kinds of enemies with His rod, and that they need not fear anything. The members entered that week with a restedness and confidence in the Shepherd’s care for they knew in their hearts that the steps of a good man were ordered of the Lord, and that God would work all things for good.

The Preacher kept preaching Christ, and though it seemed elementary, it was fresh as he drew from the wells of Old Testament as well as New with the heart of one who had drawn near and drank from the living waters. The infectious love he had for the Lord Jesus was being passed on to the congregation. Beyond just knowing, the members were catching it.

After four months the Preacher looked over his congregation one Sunday, and saw a sea of contented faces, oozing assurance and animated with joy. Though they may not have prayed every morning, nor witnessed every week, nor loved their wives as they should, or managed their time as they ought, they knew they were forgiven, empowered, loved and watched over and guided by a wonderful Man with scars in His hands, and love in His eyes.