Contemplative prayer in a Pentecostal church 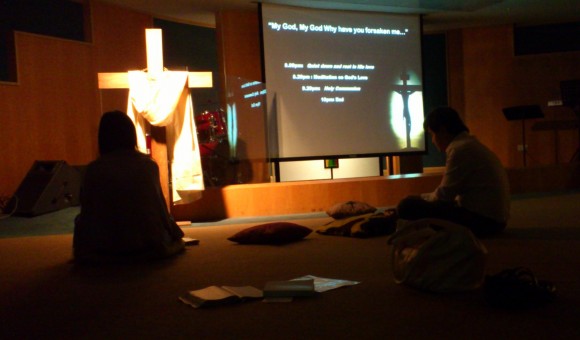 The chairs were removed from the worship hall for the Holy Week of Contemplative Prayer. A wooden cross had a  robe wrapped around its outstretched arms. Around the neck, was a crown of thorns ingeniously made from rose branches and toothpicks twisted together. A large candle, and a porcelain blue cup and plate bought from Israel, were laid on an Ikea coffee table with a beautiful 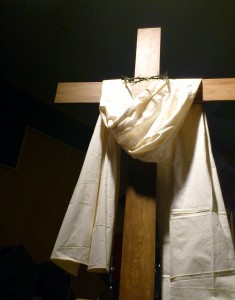 tablecloth. At the sides of the hall were three tables and chairs set aside for faith expressions: artwork materials, soft clay, and card making materials. The lights were dimmed on all four nights of the arrival of contemplative prayer in a Pentecostal church.

Holy Week as we all know starts on Palm Sunday and culminates on Easter Sunday. In the lead up to Good Friday and a Easter Sunday Baptism we created an inviting environment for God-chasers to contemplate the death of Christ. The theme this time were the 7 words of Jesus from the cross. It built up on Good Friday with 7  sermonettes on the same theme interspersed with music, silence and worship. Then the climax was an Easter celebratory service followed by a baptism in the East Coast – a most fitting end with all the church people having a picnic and food galore at the beach.

Each evening of the Holy Week of Contemplative Prayer began at 8pm and ended at 10pm though people were free to leave earlier at 9.30pm. The evenings were led by a facilitator who

guided the participants through the silence, the lectio divina, the journaling, and the holy communion. Instrumental music and silence were used and it needed no live music. On each evening,  a scripture passage that captured the words of Jesus on the cross were read three times, and minimum comments were made, so that the participants can receive the word of the Lord. 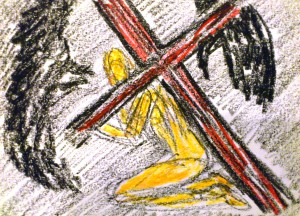 The attendance was encouraging. To make a retreat require annual leave, giving up weekends, and money. Though such contemplative nights cannot be compared with the sheer vastness of undistracted time devoted to attending to the Lord in a retreat, it is a good complement, as it is grounded in everyday life. Unlike in a retreat, the participant does his daily activities as usual and comes to the place of quiet prayer with some effort, and leaves to go home to rest and then to work/school the next day. The ordinary day becomes the space for “retreat”. A regular daily rhythm of prayer and reflection may take shape in the midst of ordinary living. This is something that cannot happen in a retreat. As many as half of the 20-30 participants came every 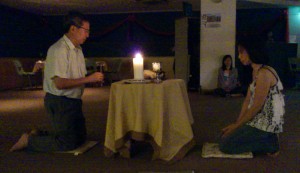 night. Some of them wanted it to be a more regular affair. Most were blessed and helped by the guided times of silent prayer in a community context.

It may be regarded as rather odd that the contemplative and charismatic can flow together like streams that join together to water the people of God. How can something so “Catholic” be found in something more known for  noisy meetings and emotionalism  and evangelical fervour? But why shouldn’t the waters mix together in a heady, bubbly oxegenated mix?  Weren’t the early Christians contemplative Pentecostals? Both of these stereotypes of ancient spiritual practices being “Catholic” (and therefore suspect) and Pentecostals being boisterous and uneducated spiritual drunks do not belong to the 21st century. They are baggages that should have been left behind in the last century. We need a spiritual humility, one that discerns what is good in other traditions, acknowledges them as God’s gifts, and adapt them for use in one’s own tradition.