C.S. Lewis on the finished work of Christ 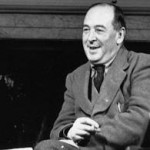 What, then, is the difference which He has made to the whole human mass? It is just this; that the business of becoming a son of God, of being turned from a created thing into a begotten thing, of passing over from the temporary biological life into timeless ‘spiritual’ life, has been done for us. Humanity is already ‘saved’ in principle. We individuals have to appropriate that salvation. But the really tough work – the bit we could not have done for ourselves – has been done for us. We have not got to try to climb up into spiritual life by our own efforts; it has already come down into the human race. If we will only lay ourselves open to the one Man in whom it was fully present, and who, in spite of being God, is also a real man, He will do it in us and for us. Remember what I said about ‘good infection’ . One of our own race has this new life: if we get close to Him we shall catch it from Him.” (Mere Christianity, C. S. Lewis, pp. 156-157)