Home   »  Interests   »   Clash of the continents and tennis

Clash of the continents and tennis 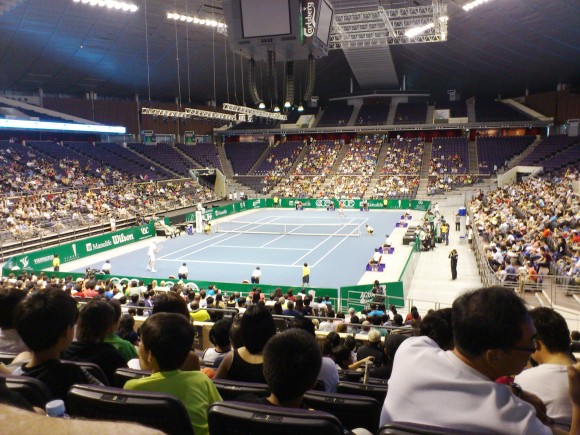 A friend dropped by and handed a few free tickets to the Clash of the Continents tennis exhibition at the Singapore Indoor Stadium. Why not? I was on leave and had time to spare and had never been to one before. My wife, a neighbour and I arrived at about 3pm and managed to watch the tail end of the first match and the full match that pitted Japan’s and Asia’s No. 1 player with an Argentina player, once ranked No 10. The match was absorbing with a few light moments of entertainment though I wished there had been more intensity, more tension. Before I knew it, the match was over and two hours had passed. A few interesting things about tennis and me:

I picked up tennis when I was in secondary 2 in Swiss Cottage Secondary. There was no proper coaching so I picked up the game watching TV and reading books in the library. It was a poor way to learn.

It was a clay court and that meant preparatory work on the court before you could play. We had to even out the clay and had to drag a heavy roller up and down the court to flatten the ground. When balls were hit out onto the slope we had to climb a fence and search among the bushes for the ball.

I had a bronze medal from the national games. We played and lost to St Joseph’s and St Patrick’s and we had a walk over with either Beatty Secondary or Outram Secondary. There were four teams in the whole of Singapore. That’s why Swiss Cottage was third and I had a medal. 🙂