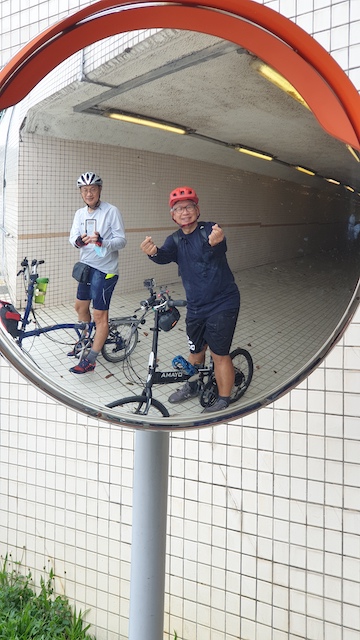 Persevering From Coast to Coast

The morning was cool and cloudy. The weather report predicted rain in the late morning. We have planned to cycle from Jurong East MRT to Coney Island and from there to Yishun MRT, where we would both fold our bicycles and return home by MRT. We met at about 7 am but there was a problem: his folding bike’s brakes were not working well. He had tried to repair it the night before but it did not seem to be good enough. Abort or continue? We decided to continue but with caution. When there were slopes he would dismount and walk his bike. For sure the sole of his shoes would be worn off more than usual.

My mistake was to ride on the wrong side of Dunearn Road. I took the one heading towards the city. I should have taken the route away from town. There were too many streets where we had to wait, and pavement bumps we had to negotiate on the route we used. I believe the other route would be smoother, since it had more institutions and less residential areas.

I was familiar with the route from Jurong East to Adam’s Road hawker center, where we planned to have their famous nasi lemak for breakfast. However from there on Eng Hwa would have be the guide. I queued thirty minutes for nasi lemak and we had to park our bicycles outside but within sight. My Brompton is expensive so I was relieved that Eng Hwa had a lock and we parked near the entrance where an ambassador assured us he will keep a lookout.

From there we went a roundabout way via Kheam Hock Road to MacRitchie Reservoir, and then to Marymount Road. We did a detour through Bishan Park as the construction diversions and activity along the National Parks recommended route was unpleasant. We finally reached Buangkok Park Connector and from then on it was park connectors all the way to Coney Isaland.

While enjoying our laksa and kway teow mee at Happy Restaurant, a kopitiam, it began to drizzle so we rested longer than usual, and chat about what’s been happening since we last met. When the drizzle was lighter we headed out with raincoats and reached Coney Island. From there we headed to Seletar via the park connectors and reached Rower’s Bay and finally Yishun MRT. It was a 49 kilometre ride. I was not particularly beat. I was surprised I was okay. Maybe it was the cool temperatures and cloud cover throughout the day. Or the many occasions when we had to slow down because of the several slopes along the route.

I was happy and satisfied that I did this. I tried a few times but could never attempt it because of Covid restrictions, or my pastor friends were not able to make it. The highlight was riding through Bishan Park, which I find to be a lovely gem in the heart of Singapore.

My reflection of this whole ride was that if we had allowed poor brakes or rain to deter and defeat us, we would have had regret hanging over our heads whenever we recall our aborted trip. We would always be thinking and talking about “What if we had just gone despite all the obstacles we faced?” Glad we persevered. Sometimes when a major decision needs to be made, one of the considerations can be, “Will I regret this choice on the day of judgment when I stand before the Lord?” Making a choice that brings a smile on the Lord’s face or a “Well done!” from him, will give us the power to persevere even through fiery trials. “For the joy that was set before him”, Jesus endured the trial and suffering of the crucifixion (Heb 12).