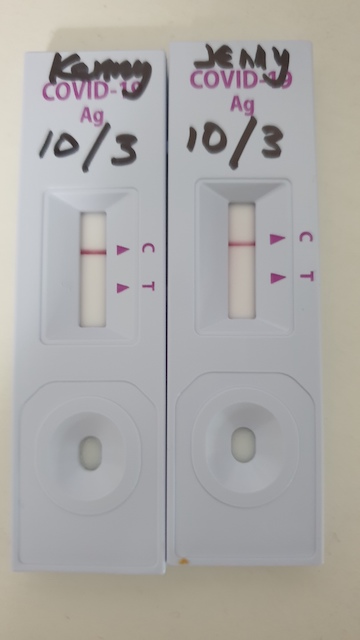 In Close Quarters With Covid-19

My brother in law Simeon Poh was infected by covid-19. He was coughing badly in my home. We tested him quickly and the ART test showed he had covid-19. We were distressed as we searched for more information, and made calls to hotlines, and looked for clinics that were open on a Sunday. When we finally went to the 24 hours clinic at Jurong Gateway nearby, Simeon went through another ART test and PCR test in the clinic. We were later told that within 24 hours we would be contacted and Simeon would be sent to a care facility.

We waited for the call while we bought things he may need and went to his home to help him pack his clothes, medicine and other stuff. We were told he would be housed in D’ Resorts at Pasir Ris, which looked good in the pictures in the internet. By Monday 5pm he was driven there in a car. We were thankful to God that everything went smoothly.

However, after a day at D’ Resort he was sent back at 9pm on Tuesday. My niece ART tested him and he ran positive. Why then was he sent back home? More distress. My wife made many calls and we were told to wait while they checked on what happened. The Ministry of Health hotline folks finally called, and on Wednesday he was sent to NTUC Tampines Nursing Home. Evidently, he did not know how to take his own blood pressure and temperature, record the details, and use his mobile to send it back to the nurse’s station daily. Well, he is over seventy years old and use of mobile phone cannot be taken for granted! Supposedly he was to be sent to another place but they mistakenly sent him home!

Anyway we were thankful that he was finally sent to a nursing home and they were excellent and professional, giving us regular updates about his situation and calling us for details about his other medications. This is certainly a more suitable place for Simeon and he was settled there.

Finally, after the few days of feeling stressed, relieved, and then stressed again, we had a breather. We thought it would be nine days from the time he was infected but we were to be surprised again! They called us on Friday and told us Simeon can go home on Saturday, even if the ART test shows positive, because he is no longer infectious by the seventh day! This was new to me! Therefore, he returned home by taxi on Saturday at 2pm with running nose and cough still evident. This seems to be the current protocol. It keeps being updated as new studies and information about omicron is received, analysed and acted upon.

Still We Are Thankful

We had no choice in this and were thankful that our government had these care centres for those who cannot manage isolation on their own for various reasons. The only payments we made were for the clinic ($10 – subsidized heavily), and taxi fare ($22) home, and the care he received in the isolation centres were free of charge. Thankful to God.

However, I received a Health Risk Notice on Thursday, 10th March. I was to stay at home and monitor my health until the final day and my final ART test on 14 March. Of course, I could go out if my ART test was negative but I did not. I did three ART tests: one before, and one when I received the notice, and one at the end. All negative.

Strangely my wife never received a notice even though she was the “closer” contact. Nevertheless, we both took the necessary restrictions seriously and we cancelled quite a number of appointments, even though our ART test were negative, knowing that people may not be comfortable, but were unable to express it.

The stress never ends. Today I heard my nephew now has been infected….