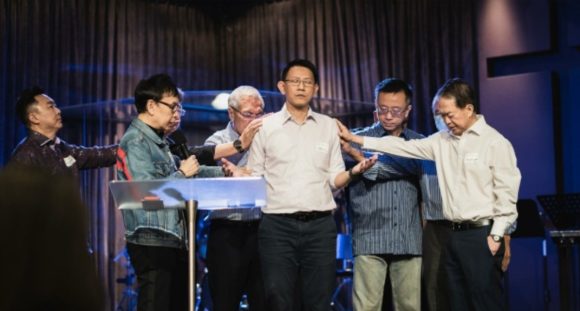 The morning of the one-day “I Will Build My Church” seminar was stormy and I was disappointed that I could not take the MRT and ride my foldable Brompton bike to get there. I was anxious as I waited for the storm to wane. I lived in Jurong while the venue was Riverlife Church in Pasir Ris. However I was thankful that the path to the Chinese Garden MRT was mostly sheltered. Even then my pants got wet because of the strong wind. By the time I reached Pasir Ris station, I grabbed the first cab I saw.

Even then I was late, and entered the hall of about almost 150 pastors and leaders seated in the first worship hall of Riverlife when the church used the current location. The first plenary speaker Senior Pastor Ben Lee of Riverlife Church, was already teaching about the fourth of the top ten concerns about the ascension gifts. I like what he had to say and resonated with what he explained so systematically, clearly and emphatically.

The second plenary session was delivered by Pastor Gabriel Han, formerly senior overseer of Victory Family Centre. He is the set leader of Ministers Fellowship International, Singapore (MFIS). Already I could see the different impact each speaker brought. While Ben Lee enlightened and clarified, Gabriel inspired and imparted faith. By the time he ended, I was blessed and armed with faith that the Lord himself will build his church, and it will be a prevailing, equipping and glorious church.

The surprise bang was when the guest preacher was Tan Ye Peng, once the deputy pastor of City Harvest Church. He preached about how radical grace forms the new humanity that is the church. It turns upside down the honor-shame culture of the first century. In this new creation, everyone whether male or female, slave or free, Jew or Gentile, rich or poor is graced with an honor that is founded not on abilities, wealth, job status, lineage, or power, but upon God’s radical grace. The shame is of course removed by forgiveness, reconciliation and the love found in Christian fellowship. Such radical grace is best demonstrated in the way Christians treat each other with honor as bearers of the image of God.

Pastor Tan first began his talk by asking forgiveness for the hurt that the City Harvest Church had inflicted upon the body of Christ. While in prison for two years, he had often imagined himself apologizing to the pastors of Singapore churches. He ended his message the same way he began: asking forgiveness. Everyone could sense the sincerity of his heart, the sacredness of that moment. Even the harps of heaven hushed, and angels tiptoed around the stage as the leaders of MFIS surrounded him with prayer, prophetic encouragement, and Pastor Lawrence Lee even apologized on behalf of the churches. The presence of God was palpable and I was deeply moved by the radical grace that was demonstrated before my eyes.

Pastor Ye Peng also shared how he decided to pursue a Masters in Singapore Bible College and how a monthly Bible study he led grew from a small group of ex-CHC members who ceased attending church, to a fellowship of about 200. He also shared how God is using him to minister to people about to go on trial, those in ongoing trials, others who are already incarcerated, and still others who have come out of prison. These people find it safe to share their woes with him. He has become a wounded healer.

I had a great lunch and enjoyed the hospitality of the Riverlife Church team. However, I had to leave after lunch. I left thinking I could walk to the MRT, since the weather was fine. However, when I saw a bus stop, I decided it was better to wait a while and take the bus. Indeed, it proved to be the better choice.